Conor O’Shea convinced Italy have what it takes to succeed

Gerry Thornley and Gavin Cummiskey preview Ireland’s upcoming Six Nations match and how Joe Schmidt's team can get their season back on track after defeat to Scotland. Video: David Dunne 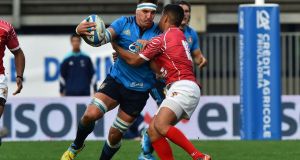 The former Ireland fullback has admitted the Azzurri have a “mountain to climb” to pull off a Six Nations victory over Joe Schmidt’s side in Rome on Saturday.

Head coach O’Shea believes he can shake off the oddity of preparing a Test team to face Ireland, then insisted last weekend’s 33-7 loss to Wales does not represent a return to struggling form for the Italians.

“It would be easy to look at last week’s result and say, ‘It’s the same old Italy’: I can guarantee that it is not.

“Changing the mindset has to be our goal in the short term. I am sure the group has the right potential for the future, but we have to change attitudes and improve our play.

“Through tough times and good times we have to gain experience.

“Ireland had some hard years, but they believed in a long-term project and are reaping the benefits. We are taking the same path.

“Ireland is my home, my family, it’s the place where we spend the holidays. It’s the country where I grew up and where I always wanted to play.

“But now my only objective is Italian rugby. So I don’t think of Ireland but only of us, Italy.

“We face a mountain to climb for 80 minutes, so I hope we’re ready for a big game this weekend.”

Talismanic Italy captain Sergio Parisse has been passed fit to face Ireland at the Stadio Olimpico on Saturday after suffering a neck problem in last weekend’s Wales defeat.

O’Shea lamented perceived refereeing inequalities against the Welsh, demanding the Azzurri be “refereed on a level playing field”.

Now the former Harlequins coach has revealed his satisfaction after dealing with World Rugby’s referees bosses this week.

“We sent our report to the arbitration managers of World Rugby and are pleased with the feedback we have had,” said O’Shea.

“We need now to focus on what we can control, the details that make the difference.

“Discipline and attention to detail, particularly in the exits from our 22. We suffered here against Wales. It’s something we can control and therefore improve.

“It’s those little moments that change the energy of a match.”

O’Shea has made four changes in total to the side that lost to Wales, with lock Andries Van Schalkwyk and flanker Simone Favaro returning to the starting line-up.

Angelo Esposito starts on the right wing with Giulio Bisegni dropping out of the matchday squad.

Leonardo Ghiraldini returns at hooker in place of Ornel Gega and will partner Andrea Lovotti and veteran Lorenzo Cittadini in the frontrow.

Maxime Mbanda, who came on as openside flanker for Simone Favaro against Wales, will start on the blindside, leaving Abraham Steyn on the bench.