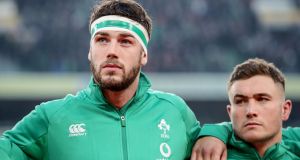 Caelan Doris is likely to be restored to the replacements in the only change to the match-day 23. Photo: Inpho

If it ain’t broke don’t fix it is likely to be the attitude of Andy Farrell and his assistant coaches when he unveils his starting XV and replacements for Sunday’s pivotal Six Nations meeting with England at Twickenham (kick-off 3pm).

Having backed up the win over Scotland with an improved, bonus point victory over Wales, the return of Caelan Doris after being rested for the latter game looks like being the only change to the match-day 23 with Max Deegan making way for his Leinster team-mate.

While Conor Murray’s sharp passing, strength and decision making in the opening two games have calmed the previously heightened debate over the scrumhalf position, the demands for Doris being reinstated at number eight against England have intensified, with Victor Costello and Gordon D’Arcy among those leading the calls.

If that were to come to pass, it would presumably mean CJ Stander shifting to blindside after two man of the match performances in which his strength in the jackal to win turnovers has been a huge factor in the two wins, with Peter O’Mahony dropping back to the bench.

Doris was desperately unfortunate to see his debut against Scotland ended in the fourth minute, and in light of the premature end to his Champions Cup debut against Benetton last December due to concussion, he was not considered for the Welsh game.

The 21-year-old from Ballina is strong in the jackal himself, and with his lines of running, strength in the carry, offloading game and tackling, looks sure to be re-instated in the match-day squad on Wednesday.

His claims for starting will have been seriously considered too. Had Doris got two test starts under his bell instead of a few minutes, the case for starting him in Twickenham would have been compelling. And all things being equal, he has the ability to go on and have a serious career at international level.

However O’Mahony’s response to being left on the bench against Scotland, if only for the first four minutes as events transpired, has been eye-catching. The Munster man should thus be retained for what promises to be a key battle at the breakdown on the presumption that Eddie Jones retains Tom Curry at eight as one of three opensides in the English back-row.

Along with Ronan Kelleher and Andrew Porter, Doris could still bring plenty of youthful ballast off the bench as one of Ireland’s finishers in the last 20 or 30 minutes.

If Farrell and co do look to inject some additional carrying, it might be that David Kilcoyne will be promoted given his consistently strong form of late and the impact he made against Wales. But Cian Healy will most likely start again.

The backline looks pretty much nailed on. After two years cutting his teeth at this level, Jordan Larmour’s time has finally come and, after starting back-to-back matches at fullback for the first time, he has added another dimension to Ireland’s attacking game. It’s not just his footwork and ability to beat the first tackle - witness the breakthrough try against Wales - but he also hit the line and linked well with his wingers in that game.

Similarly, having had to wait a good while longer, the 28-year-old Andrew Conway is hell-bent on not letting slip this hard-earned opportunity. Whereas the Scottish game was Larmour’s second start in the Six Nations, it was a first for Conway and continuing on in the same vein against Wales his every single involvement was a positive, whether chasing a high ball, making a carry, kicking, tackling or, ultimately finishing off his tenth try in 20 tests smartly.

Keith Earls’ knee issues may have partly opened the door for Conway, and the former quipped last week that he now wants to apply the heat on his provincial teammate which he himself had been experiencing in recent years. Earls’ assured impact off the bench for the last 35 minutes against Wales in the relatively unfamiliar position of outside centre showed he was true to his word.

Will Addison might look like a more obvious fit for the number 23 jersey in that he can cover midfield and the back three, and he was the only player not in the match-day 23 against Wales who was subsequently named in the squad for last week’s two-day training camp.

However, his ongoing calf issues, which prevented him from attending the camp in Cork, has probably clarified that picture, besides which Earls’ display as a replacement for Robbie Henshaw was a reminder of his ability to cover midfield as well as wing.

Making good decisions on the ball and in defence, Earls also distributed well, and it was hard to believe he hadn’t started a game in midfield for Munster in over two years and for Ireland in almost four.

Helped by Ireland’s work-rate off the ball making space in the wider channels, Henshaw’s own performance made light of Garry Ringrose’s loss due to the fractured thumb which now makes him doubtful for the remainder of the tournament. Using his footwork to beat tackles or find soft shoulders, and also looking to offload, Henshaw’s display was a reminder that there is more to him than trucking the ball up at inside centre.

That said, Henshaw and his old Connacht midfield partner Bundee Aki are liable to have a tougher task defensively in limiting the effect of Manu Tuilagi, who is expected to be restored to the English midfield as their go-to man after recovering from the calf injury which forced his departure just 15 minutes into their opening defeat by France. Jones does not name his side until Friday.

Jones’ selection looks less predictable whereas, as is usually the case with a settled team, it’s a barometer of Ireland’s relative well-being that the side in large part picks itself.