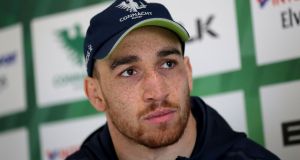 Ultan Dillane: Connacht are keen to have his services for visit to Edinburgh. Photograph: James Crombie/Inpho

Connacht are looking for lock Ultan Dillane to be released from the Irish camp later this week to enable him to travel to Edinburgh for Friday night’s ProI4 clash at Murrayfield.

Centre Bundee Aki, hooker Dave Heffernan and Dillane returned to the Irish training this week ahead of the Six Nations clash against England in Twickenham, but Connacht have requested the return of Dillane due to more injuries to their second row players.

Quinn Roux has been out of action since Christmas with a hand injury, and now Gavin Thornbury is the latest to be sidelined with a calf injury. Thornbury, Connacht’s main lineout stealer, had a “little tightness” prior to the Cardiff fixture, but was forced off in the second half and is now waiting the results of a scan.

If Dillane is unavailable, Connacht will look to former Leicester Academy product Joe Maksymiw and Connacht Academy lock Niall Murray, who was handed his first start last month against Leinster, to form a new partnership to face the Conference B leaders, with backrow player Eoghan Masterson as cover.

“We are waiting on the status of two internationals,” says backs coach Nigel Carolan. “Being a Sunday game makes it more tricky, but we have put in a request, particularly for Ultan, with Quinn being injured, and we are waiting for a review of Gavin.”

Also ruled out is hooker Tom McCartney with a continuing hip problem, while it is unlikely Matt Healy will travel, having been sidelined with illness. However, Colby Fainga’a, who left the pitch against Cardff, is fit to play.

Connacht head to the Scottish capital buoyed with their 29-0 win over Cardiff, but are not getting carried away.

“It’s a good start for us in that we are looking at this as a block of three, and we know our whole season pivots on these three games,” said Carolan.

“The game against Cardiff was hugely important in that we stopped the rot. There was a bit of a slide with five extremely difficult games, with three inter-pros and then two European matches against huge French teams. We needed to stop that slide and we did that, so we are pleased about it, but not overly excited and not running away with ourselves.

“We won with a bonus point and kept a clean sheet, but going to Edinburgh is a huge battle. Yes they are missing a few internationals, but they have quality in depth, and they are a different animal this year than previous years. We understand that and we are going to have to be better than we were against Cardiff.”

Monivea-born Blade has played all 17 fixtures this season, and has made 109 appearances for Connacht, while Healy, who joined from Lansdowne, remains the record try scorer with 55 in 136 appearances.