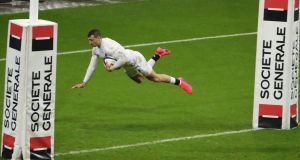 Jonny May of England scores a try during the 2020 Six Nations clash with France. Photo: Xavier Laine/Getty Images

In November, 2017, Jonny May was required to go through a series of tests to ascertain that he had recovered from a hamstring tweak ahead of a Test match against Australia, one of which was a flat out sprint.

He recorded a personal best of 10.49 metres per second which if extrapolated to 100 metres, would have given him a time of 9.53 seconds, five hundredths of a second quicker than the eight-time Olympic gold medalist Usain Bolt’s world record time of 9.58.

Of course athletics and sprinting doesn’t work that way and despite the eye-catching headlines, the 29-year-old Leicester Tigers and England wing was the first to acknowledge the flawed comparison. He explained: “It’s just a different discipline because with rugby when you sprint you go flat out and let it all go. The sprinters are trained to build into a run and hit speeds that we couldn’t get near.”

There is no disputing that May is seriously quick, or that whatever genetic blessing he’s been endowed with has been complemented with a voracious work ethic to hone his sprinting technique. It includes summer trips, partly self-funded, to former multiple Olympic and World champion Michael Johnson’s performance centre in Dallas, Texas; a cross-pollination of American footballers and elite young sprinters.

It represents an add-on to his primary focus as a rugby player and he’s grafted to develop the constituent parts of his game including footwork, power, aerial work, tackling and kicking. As he demonstrated recently against France in Paris, given a millimetre May is a lethal finisher, scoring two tries and also tagging on a quickly taken conversion as England looked to claw their way back into the game.

He came through the Gloucester academy at the same time as players like Freddie Burns, Henry Trinder and Charlie Sharpes joining them in the England under-20s team (2010) scoring six tries in eight matches. In 2012 he was part of the England squad that toured South Africa in the summer scoring two tries in the game against the Sharks but did not appear in the test series.

It didn’t stop Joe Marler – the Harlequins prop made his England debut on that tour – from getting May into trouble. One of the rituals of a new cap is a requirement to sing a song on the team bus and after Marler performed that duty he persuaded May to do likewise even though the latter had yet to make his debut.

As May beat boxed his way through Vanilla Ice’s, Ice, Ice Baby, he was excoriated by the senior players but had the strength of character to ignore the abuse and finish the song. He eventually made his England debut the following summer in Argentina, although that didn’t look likely at one point.

Having missed out initially on being selected for the first test, he wasn’t selected for the match-day 23 for the second, but on the morning of that game Christian Wade received a call from the Lions to join them in Australia, handing May his debut.

He recalled subsequently: “Basically because my mum and dad were out (in Argentina) I went out for dinner with them and all the other non-23 players went out on the piss, so I got the ‘go on you can play’ pretty much. It’s funny how it works out. What was probably quite a challenging couple of weeks finished on a really good note as my parents got to watch me play and I got my first cap; it all worked out in the end.”

It wasn’t until his eight cap, against New Zealand that he managed his first try, but all told he’s scored 29 in 54 caps. A torn ACL (anterior cruciate ligament) enforced a long layoff but when he returned in January, 2016 his all-round game had improved. He joined the Leicester Tigers in 2017, crossing for nine tries in his first eight games.

Sunday’s visitors to Twickenham, Ireland, know all about May’s talent; in five matches he’s been on the winning side in four and scored tries in three of those games. England head coach Eddie Jones’ preference to select Elliot Daly on the left wing means that May, who wears the number 11 jersey for the Tigers, plays on the right wing.

For those looking for an omen ahead of Sunday, the only time that May played on the right wing for England against Ireland was in 2018 – he scored a late try – when Joe Schmidt’s side won a Grand Slam at Twickenham. His direct opponent that day, Jacob Stockdale was an Irish try scorer.

The other four occasions he’s been on the left wing. Andrew Trimble kept him scoreless in 2014, Tommy Bowe marked him when he crossed for a try in a World Cup warm-up match in 2015, Keith Earls couldn’t prevent May from adding to that personal tally in a Six Nations game at the Aviva stadium (2019) while Jordan Larmour held him try-less in a World Cup warm-up match last year at Twickenham.

England’s attacking shape recognises May’s versatility and ability to play on both wings and it’s not just happenstance that he and Daly find themselves side-by-side near a touchline from phase play. They also use his speed to chase a variety of kicks, particularly grubbers; all of which underlines the necessity from an Irish perspective to deny him any wriggle room come Sunday.