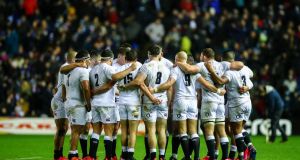 What to make of England then? Was their 19-7 World Cup semi-final win over New Zealand, which ended the All Blacks’ back-to-back hold on the William Webb Ellis trophy, their Icarus moment?

Since that high point, as it were, they lost the World Cup final to South Africa and were beaten by France in Paris, before withstanding the storms generated by the Scots, the Murrayfield crowd and Ciara, to earn a sleeves-rolled-up 13-6 win. Such were the conditions that very little could truly be read into England’s all-round game, but they’ll have taken plenty from the manner of that victory.

Lest we forget too, in order to reach the World Cup final they beat Argentina 39-10, Australia 40-16, and then the All Blacks – that’s some run of scalps – before being denied a clean sweep of the southern hemisphere quartet when the Springboks proved a game too far.

A good team has to find different ways of winning, and while there could be plenty of rain about this weekend, it’s likely we’ll see more of England’s potent running game

Even then, the game turned entirely on England losing Kyle Sinckler in just the third minute and the huge ebbs and flow in psychological energy which followed with every Springboks’ scrum penalty.

There have been signs that England have been suffering from a World Cup hangover, which is entirely understandable for there can hardly be a bigger disappointment than losing a World Cup final.

Their tournament was also a fortnight longer than those of France and Ireland, and three weeks longer than Scotland’s insterest. This seemed to filter through to their clubs’ performances in Europe, which in turn was compounded by the Saracens saga.

Jamie George, particularly, and Maro Itoje have spoken of the fall-out from so much of the Saracens’ players hitherto private contracts being made public. George looked a little out of sorts in Paris, and so too Owen Farrell.

However, there didn’t seem too much wrong with their squad togetherness in Murrayfield. Granted, in adapting to the conditions, England played little rugby, kicking the ball out of hand 47 times (and making only 66 passes). But when your tight five, with Itoje leading the charge, are making 82 of your team’s 148 tackles, you have a chance.

A good team has to find different ways of winning, and while there could be plenty of rain about again this weekend, it’s likely we’ll see more of England’s potent running game, with two playmakers – George Ford and Farrell – operating behind two pods and having the ability to go out the back and go wide, where England are very pacey.

As is so often the case, a strong English start would change everything. And as Andy Farrell noted last week, many of England’s biggest wins in recent times have been predicated on flying out of the blocks to telling effect.

No doubt he had in mind last season’s opening Six Nations game between Ireland and England at the Aviva Stadium. Back for his first Six Nations game in six seasons, Manu Tuilagi was launched at the Irish midfield at literally the first available opportunity when he was the intended target from George’s first long throw before the power play was completed by Owen Farrell’s try-scoring double skip pass to Jonny May. It was a similar story when Tuilagi rewarded a blistering start in the World Cup semi-final with a second-minute try.

Although England were knocked out of their stride in the early stages in the Stade de France on the opening Sunday, initially they threatened to do the same when Sam Underhill latched onto a loose tap down from the game’s first lineout by Francois Cross.

Tellingly though, Les Bleus drew energy from winning the first few key moments, as big hits by Gael Fickou and Gregory Alldritt forced spillages from Tom Curry and Sinckler, before they then drew first blood with a try by the debutant Vincent Rattez.

Fast starts don’t just imbue the early pace-setters, especially when roared on by a full house at home, but they can rattle the sides which fall behind. The ball then broke unluckily against England for Charles Olivon’s first try and the pace of the game seemed at an altogether different level from the Scotland-Ireland match the day before.

They also lost Tuilagi in the 16th minute with a groin injury and after missing the Scottish game the likelihood is that their go-to midfield carrier will be restored against Ireland. It could be that Henry Slade will be as well but this seems unlikely.

As it is, the likely presence of Ford, Farrell and the left-footed Elliot Daly will again give England plenty of dangerous kicking options, albeit there must be a slight doubt about Tuilagi’s fitness.

Ben Youngs, whose sniping and running game have always drawn huge respect from Irish sides, may also be reinstated as the starting scrumhalf.

True, Billy Vunipola, such a thorn in Irish sides over recent years, remains a massive loss and the absence of one Vunipola appears to diminish the other a little. But Tom Curry, still only 21, is such an athlete and complete carrying and tackling backrower he had a bigger impact at 8 in Murrayfield, and in tandem with Sam Underhill will provide a huge dual threat over the ball.

True, South Africa – and until May’s two moments of individualistic brilliance in Paris – France also showed England can be shut down with fast defensive line speed and huge physicality in contact. But that’s what will most likely be required by Ireland.

Perhaps most of all though, this will be England’s first game at Twickenham since last August and that record 57-15 win over Ireland, and Ireland’s Grand Slam coronation on that Baltic St Patrick’s Day two years ago remains England’s only home defeat in 19 Six Nations games dating back to 2012.

Returning to their south west London fortress will be a huge reference point for them this week and whether or not they were burned by their World Cup experience, you’d have to think England are primed to produce their best performance of this Six Nations to date.