Robin McBryde: Farrell will be judged on results, not style 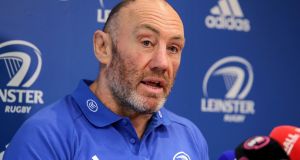 Leinster scrum coach Robin McBryde: ‘As anybody knows with England, they’ve got strength in depth, size. They’ve got money, they’ve got everything. You’ve just got to go after it, show you’re hungrier than them.’ Photograph: Laszlo Geczo/Inpho

Leinster scrum coach Robin McBryde has said that a steely resolve will be an imperative for Ireland as they aim to deliver the goods against England at Twickenham Stadium on Sunday (kick-off 3pm).

Before touching down on these shores in November, McBryde spent 13 years in the senior national set-up of his native Wales. During that time, the Welsh recorded three victories over their arch rivals in London – including a pool encounter at the 2015 World Cup.

“It is belief. Belief in yourselves and the systems you’ve got. As anybody knows with England, they’ve got strength in depth, size. They’ve got money, they’ve got everything. You’ve just got to go after it, show you’re hungrier than them,” McBryde remarked in relation to Ireland’s prospects for the round three tussle.

Though Ireland wrapped up a Grand Slam in their last Six Nations game at Twickenham two years ago, they suffered a brace of chastening defeats to Eddie Jones’s men in 2019.

Their defence of that Championship crown began with a comprehensive home reversal at the Aviva Stadium a little over 12 months ago while they were subsequently on the receiving end of a hammering in the English capital last August.

Yet rather than anticipating a mental hangover from the latter – a World Cup warm-up clash – McBryde feels the opposite could be the case.

“It makes it easier, if anything. If you’ve had a hard loss against somebody, then you make sure you are more determined to go out there and give a better account of yourself than you did the last time. The motivation is always there when you are playing England anyway.”

It has been an encouraging start to Andy Farrell’s reign as Ireland head coach, with back-to-back triumphs against Scotland and Wales leaving them just behind Six Nations leader France on score difference moving into week three of the tournament.

While Farrell’s predecessor Joe Schmidt garnered considerable success during his time at the helm – three Six Nations titles, including the aforementioned 2018 Grand Slam – the consensus was that Ireland became too predictable in the closing months of his tenure.

Initial evidence points towards Farrell bringing more creativity to the Irish play, but McBryde stressed the Wigan man will ultimately be judged on results and not the style of rugby he employs.

“In Wales, the same things were thrown at us with regards to being predictable. Just ‘take it up the middle’ etc. Unless you’re involved in any environment, you’re always clutching at straws or guessing. Speculating as to what a team’s trying to do. As much as we were trying to change things subtly, you have to just ignore all the pressure from outside.

“At the end of the day it’s all about results. It’s a winning industry and if you’re winning it doesn’t matter what anybody thinks. You have to just keep on winning. There’s so much at stake, a lot of things can just turn on fine margins during a game. Especially in the Six Nations,” McBryde added.