Connacht hand Cardiff a dose of the blues 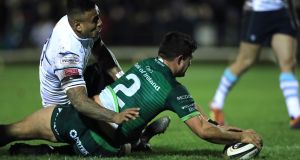 Connacht’s Dave Heffernan scores a try in the first half at the Sportsground. Photo: James Crombie/Inpho

Ireland hooker Dave Heffernan delivered a man-of-the-match performance as Connacht ran out 29-0 bonus-point winners over Cardiff Blues at the Sportsground.

Carty, who failed to make Ireland’s Six Nations squad, had a hand in John Porch’s 49th-minute score before Kyle Godwin bagged a breakaway bonus-point effort as the westerners ended their five-match losing run in all competitions.

Despite Nick Williams’ solid impact off the bench and a Denis Buckley yellow card, Cardiff continued to make errors and they now trail fourth-placed Connacht by six points in the Conference B table.

Cardiff were on the back foot for much of the first half, losing three of their own lineouts and missing a dozen tackles. James Ratti and Olly Robinson led their resistance, popping up with some crucial defensive interventions and turnovers.

Carty opened the scoring with a fifth-minute penalty from in front of the posts, and his kicking out-of-hand kept Connacht on top of the territorial battle. Fullback Tiernan O’Halloran also pinned Cardiff back with a clever touch-finder.

Lineout pressure from Gavin Thornbury, who worked brilliantly in tandem with Ultan Dillane, forced a loose throw from Cardiff’s Liam Belcher, who watched Heffernan gobble it up at the tail and weave his way past two defenders, crashing over past a poor Jason Tovey tackle to make it 10-0.

With Hallam Amos caught too narrow, Paul Boyle burst forward to set the wheels in motion for a 33rd-minute try. Carty slid a superb left-footed kick towards the right corner which was finished over the line by Robb, despite Dan Fish’s despairing tackle.

Carty’s conversion attempt blew wide on the near side, and Cardiff had to scramble to avoid leaking another try before the interval. Jason Harries scrambled to bring down O’Halloran a few metres out, following Carty’s inviting offload out of a tackle.

Connacht did more damage in the third quarter, Carty’s skip pass putting Buckley into space and the replacement prop’s instinctive behind-the-back pass, under pressure from two defenders, found its way to Porch who finished off, with TMO Charles Samson ruling out a forward pass.

The visitors failed to capitalise on a Will Boyde break and replacement Lewis Jones knocked on at a subsequent scrum. Repeated infringements led to Buckley seeing yellow in the 64th minute, but Kristian Dacey’s crooked lineout throw meant the increasingly-frustrated Blues remained scoreless in Galway.

1 My favourite sporting moment: Game, set and couch as Borg takes down McEnroe
2 Australian rugby staring into abyss as another crisis hits
3 Garry Ringrose to stay with Leinster as he signs two-year central contract
4 Six Nations rugby needs to be protected for terrestrial TV
5 ‘This is sick’ - seventh-tier Swedish club cancels friendly after betting mayhem
Real news has value SUBSCRIBE

Harrington would prefer 12 captain’s picks than delayed Ryder Cup 08:33
Australian rugby staring into abyss as another crisis hits 08:19
Ringrose set for new central deal; memories of Björn Borg at Wimbledon 06:50
Seán Moran: What nostalgia tells us about how the GAA sees itself 06:20
My favourite sporting moment: Game, set and couch as Borg takes down McEnroe 06:29
Here is your handy guide to sport on television this week