‘It’s clearly obvious that Furlong has hammered across the scrum’ 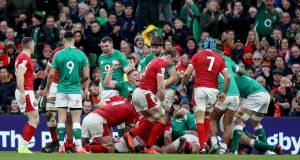 Ireland’s Peter O’Mahony and Tadhg Furlong celebrate a scrum penalty in the second half against Wales. Photo: Dan Sheridan/Inpho

Wales have questioned the legality of Ireland’s scrum technique and picked out Tadhg Furlong for special criticism following the home side’s Six Nations win in Dublin earlier this month.

Andy Farrell’s Ireland were 24-14 winners and remain on course for a shot at the Six Nations title, but the Welsh believe the Irish pack bent the rules when it came to scum time.

Ireland won a crucial 63rd minute scrum penalty at the Aviva Stadium - one which tighthead prop Furlong celebrated wildly - as they withheld Welsh pressure at a time the match.

After analysing that game in detail, Wales forwards coach Jonathan Humphreys said: “We want to scrummage a certain way and paint really good pictures. The consistency of that has been good, but when you’re dealing with tightheads like Furlong who is going to come right across the scrum from left to right, it creates problems and instability.

“We have to make sure we’re diligent in that area and there is a little inconsistency.”

When asked for his view on the key second-half penalty in his team’s defeat by Ireland, Humphreys added: “It’s clearly obvious that Furlong has hammered across the scrum. It’s created instability from left to right, but we’ve got to deal with that.

“We dealt with it for most of the game, but the one scrum we had to deal with it - we didn’t. That’s our fault. It’s a massive learning curve, but I believe our young tightheads could go on and be phenomenal. There are no excuses for us.”

Humphreys’ criticism is unlikely to bother Ireland ahead of their crucial meeting with England at Twickenham on Sunday as they go in search of a Triple Crown.

Wales, meanwhile, must beat France in Cardiff on Saturday if last season’s Grand Slam champions are to stay in the hunt for the championship title.

Maintaining their scrum attack, Wales loosehead prop Wyn Jones said of France: “They’ll be a big pack, but a little bit ill disciplined - especially at scrum time. We know they’ll hit and chase and cheat. That’s something we’re fully aware of and something we’ve got to combat on the day.

“They’ll look to push early and look to mess about at scrum time. It’s something we’ve looked at, but we’ll just concentrate on ourselves.”