Cheslin Kolbe in line to return for Springboks against England 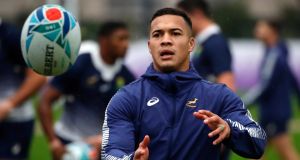 Rassie Erasmus is likely to make one change for Saturday’s World Cup final against England in Yokohama with the wing Cheslin Kolbe, who missed the semi-final victory over Wales because of an ankle injury, fit again.

The South Africa head coach drew looks of astonishment from the contingent who have been covering England here when he talked openly about selection and tactics. One, used to the antics and mind games employed by Erasmus’s opposite number this weekend, Eddie Jones, asked if he was bluffing.

“No, I am not,” he said, having looked surprised at the question. “Kolbe will come into the 23 otherwise it will probably be exactly the same. We will only have 160 minutes training this week and we have a six-day turnaround. There is not a lot you can change in that time, just one or two moves maybe.

“I have coached against Eddie’s England four times and we have never had discussions via the media. I am expecting another normal build-up to a Test match, although he might surprise us. On the field, I expect a very well coached, fit England team with a great tactical plan. The physicality they brought to New Zealand was the next level and it had been a long time since I had seen an England team turn up with that much physicality. They will be brimming with confidence.”

Erasmus, who will officially name his team on Thursday, is as direct answering questions as his players are on the field. England know what to expect on Saturday and will have to find a way of dealing with an approach that is very different to New Zealand’s.

Asked if he was bothered by criticism that their semi-final against Wales was boring and bad for the game, he replied: “You have to understand where we are coming from – eighth in the world. We had certain challenges and one of them was to redeem ourselves and become a power again by getting into the top two. You have to put building blocks in place and follow certain routes to get short-term results.

“We accept there are some things in our game we need to improve but we are in a position to win the World Cup. We accept criticism but we are happy with the position we are in. There will not be a lot of change. You can expect the same from us on Saturday.”

South Africa have only conceded four tries this tournament, the same number as England but they have played one game more. “We have varied our play against different teams and our last game against England [at Twickenham last November] was very close,” said Erasmus. “We will see how we can stop them scoring points while managing more ourselves.

“England put teams under pressure with their line speed and do not give much time and space which New Zealand found out. We do the same so we experience it at training sessions a lot. Our team selection will not be far off where it has been in previous games. We will pretty much go with the same 23 we have had in the last couple of games. We believe that is the way we can get the most out of our team.”

Erasmus believes that local knowledge will boost his side’s chances. His Bath flanker Francois Louw plays alongside England’s Sam Underhill as does Faf de Klerk at Sale with Tom Curry while Schalk Brits spent several seasons at Saracens, who provide the core of Jones’s pack and his captain, Owen Farrell.

“It will help us, although it will be nullified a bit because it works in reverse,” said Erasmus. “Also, our guys have learned to be more tactical because of the time they have spent in England where the conditions mean it is a different type of game to Super Rugby, which is more flowing.”

While Jones is involved in his fourth World Cup and is close to marking his 20th anniversary as a Test coach, Erasmus is only 18 months into his project to remodel South Africa. “The pressure is on and you can feel it, but you are also excited,” he said. “Eddie has been in finals with Australia and South Africa while this is my first World Cup. It is a big test for us to see if we can take that last step.

“Winning the World Cup is the ultimate. I would like to build consistency in performance so we join the teams chasing the top spot in the world rankings. We can use this tournament as a springboard.” - Guardian