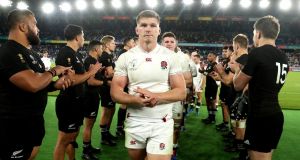 Owen Farrell is clapped off the pitch by the All Blacks after their semi-final victory. Photograph: David Rogers/Getty

At the outset of this World Cup there was a feeling that a third New Zealand win in succession would not be great for the game. Yet the way they played throughout this tournament, and against South Africa and Ireland especially, went some way toward dispelling that theory.

Had the All Blacks continued to play that thrilling rugby it would have been a brilliant advert for the game. Redesigning the team to accommodate a second playmaker alongside the peerless Beauden Barrett, the outstanding player of his generation, and a clutch of relatively inexperienced young backs in a recalibrated attack would have torn up the template. They certainly would have represented a far better blueprint for success than that provided in Sunday’s second semi-final.

Heretofore, World Cup winners were supposed to be a settled, experienced team. The All Blacks of 2019 were bold and innovative. This arguably would have been their finest creation yet, and Kieran Read deserves to be placed in the same category as Richie McCaw despite not lifting the trophy as captain. So to be honest, there’s still a little disappointment that they’re out.

However, if they were to be beaten, it’s great for the sport that it required a truly outstanding all-round display - perhaps England’s most complete and finest one-off 80 minute performance ever - to do so.

Furthermore, those initial concerns felt by some remained valid. Had the All Blacks re-designed themselves into World Cup winners for a third time, aside from the risk that this global dominance might continue forever, it wouldn’t have reflected very favourably on the rest of the game.

After all, Ireland came into this World Cup with their highest achieving team of all time. Wales are the reigning Grand Slam champions, and compiled their country’s longest winning sequence of all time. Prior to last Sunday, they hadn’t lost a competitive game since February 2018.

England were rejuvenated by Eddie Jones, slumped and have risen again, and akin to 2003 have some potential, while South Africa are the reigning Rugby Championship holders. Scotland were chipper. France were, well, France. Everyone else might have begun to despair if the All Blacks had done it again.

Admittedly, in these political times an English win could have its downside, not least if it even marginally helped the Tories win an election. Recall, after all, Jacob Rees-Mogg’s crass comment on Twitter that “we clearly don’t need Europe to win” the Cricket World Cup, even though their 15-man squad included five players born outside the UK, including their Irish captain, Eoin Morgan. At least this English rugby squad is even more representative of their multi-racial country, but some who have no entitlement to do so, will jump aboard.

However, no less than in 2003, an English World Cup win would be beneficial for the Six Nations, and in addition to playing a more enterprising brand of all-round rugby, this time England’s captain is the son of parents with strong Irish roots. And any Irish person who thinks Colleen and Andy Farrell should not be in Tokyo this week supporting Owen, on the premise that he is Ireland’s coach, is beyond blinkered.

It’s also one of many ironies in this unfolding story that Eddie Jones inherited the core of this team from Stuart Lancaster and Farrell. However Jones’s tough love approach, planning and further tampering with personnel, gradually jettisoning Dylan Hartley, Chris Robshaw and other established players, has taken them to new heights.

He has also said all along to judge him by the World Cup, which of itself seemed a risky gambit given all he has achieved in the game, but after last Saturday’s almost perfectly executed tactical master plan, it’s judging him pretty well as things stand.

Now, no matter what happens next, instead of a three-peat, there’s going to be a significant first of some kind. Either England become the first champions to only play six matches (consider if Ireland had avoided that French game four years ago at the same point), or the Springboks will become the first country to win the World Cup despite losing a pool match.

Fair play to Rassie Erasmus if the Springboks pull this one off, and this Boks team and their supporters are also more representative of their country than ever before. No one could help but be moved by Siya Kolisi’s video of their victorious dressing-room to supporters back home.

Yet there’s no doubt that the Springboks have had one of the easiest routes to the final, and such was the luck of the draw that they were probably better served losing to the All Blacks on the opening Saturday. Since then, they have beaten Namibia, Italy, Canada, Japan and Wales to reach the final.

With almost supreme irony, four years ago England became the first main or sole hosts to be knocked out in the pool stages, a record that even Japan have ensured they will continue to keep indefinitely.

All was grim in England’s world, and not much better in the rest of the European game either after France (excoriated in record style by the All Blacks), Wales, Scotland and Ireland all followed suit in the quarter-finals.

After a condensed Rugby Championship to accommodate the 2019 World Cup, this rendered the last fortnight of the tournament into a private southern hemisphere finale.

Hence, were England to complete the set by beating the recently crowned winners of the Rugby Championship, thereby completing a four-in-a-row clean sweep of Argentina, Australia, New Zealand and South Africa, there’d be nothing bogus about their claims to being champions of the World.

Arguably, they’d be the worthiest winners of all nine to date.

Certainly a four-timer against the southern hemisphere quartet would not only be another first but most probably a last as well.