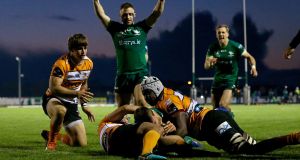 In the most dramatic finish, Connacht grabbed an injury-time winning try to light up the Sportsground and deny the visiting Cheetahs their first PRO14 win in Ireland.

As the Fields of Athenry rang out, the Cheetahs were left to rue an ill-disciplined final quarter in which they lost centre Dries Swanepoel to a red card and conceded two Tom Farrell tries, ensuring Connacht recorded their third successive bonus point win this season.

In a high octane encounter, there were worrying signs for Connacht when they had lost their lead in the 55th minute as the visitors had taken control. But the brace from Farrell in the final eight minutes ensured the home side prevailed, with Cheetahs forced to settle for a bonus point.

The home side opened their tally after 15 minutes - a move that started deep in their own half after a Quinn Roux hit on Ruan Pienaar produced turnover ball. Outhalf Conor Fitzgerald showed a turn of pace to gallop through the gap, and after several phases, the two Fitzgerald brothers combined - the younger providing the final pass to Niyi Adeolokun who raced through for the first try, which Fitzgerald converted.

Cheetahs showed plenty of endeavour up front, and pace out wide, but they were unable to make it count on the scoreboard until the 29th minute. Taking advantage of two consecutive penalties to touch, the pack did the business, driving for the line with hooker Joseph Dweba touching down, Pienaar’s attempted conversion sailing wide at the last moment.

The visitors continued to revel in the dry weather, and it took a stern defence, particularly from hooker Tom McCartney and the quick covering of John Porch, to keep tabs on their loose running opponents as the half progressed. But just before the break it was Connacht who stole a march on their opponents with another sweeping backline move - Adeolokun taking a skip pass from Kyle Godwin on the halfway line. After cutting a path through the defence, he once again found Marmion in support, and the Connacht scrumhalf finished off for try number two, which Conor Fitzgerald converted for a 14-5 half-time lead.

There was no let up in intensity after the break when Pienaar tacked on a penalty before fullback and Pro14 top try scorer Rhyno Smith finished off a sweeping move to bag his sixth to this season’s tally, and Pienaar’s conversion put the visitors into the lead for the first time.

The Sportsground erupted when Godwin was deemed offside after Connacht’s Porch looked to have scored a try following an intercept and length-of-the-field sprint, and it was Cheetah’s right wing Clayton Blommetjies who extended the South African’s lead to 22-14 with a third try, which Pienaar converted.

However when Cheetah’s centre Swanepoel was red-carded after striking Blade with his head, replacement Farrell reduced the arrears to three with a 72nd minute try, Fitzgerald’s conversion just shaving the post.

Connacht never gave up, winning three penalties in the closing stages, and after a series of scrums, Blade fed Farrell who broke over for a winning try and bonus point.

Replacements: U Dillane for Thornbury (44), C Gallagher for Roux (51), C Blade for Marmion and D Robertson-McCoy for Bealham (57); D Heffernan for McCartney and T Farrell for Robb (both 60), D Leader for Adeolokun (64), M Burke for Buckley (68).

Replacements: L de Bruin for Coetzee and W Small-Smith for Volmink (both 63), W Arnoldi for Dweba, B Venter for Ox and S Koen for Pokomela (all 72), De Preeze for Steenkamp (74).

1 Australian rugby staring into abyss as another crisis hits
2 Six Nations rugby needs to be protected for terrestrial TV
3 Garry Ringrose to stay with Leinster as he signs two-year central contract
4 Dr Claire Molloy: ‘It is a privileged place to be, on the frontline’
5 My favourite sporting moment: Game, set and couch as Borg takes down McEnroe
Real news has value SUBSCRIBE