‘If South Africa win with Siya Kolisi as captain, it'll be monumental’ 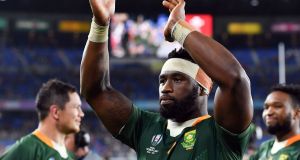 It’s impossible, from this juncture anyway, to ascertain the social significance of Siya Kolisi potentially captaining the Springboks to victory in next Saturday’s World Cup final. But, almost akin to Barack Obama winning the US elections, the possibility would have been utterly unthinkable at least until the mid-90s.

“You don’t dream about that where I am from,” Kolisi said after Saturday’s semi-final, even though he had already taken rugby nine years before he watched the 2007 final at the age of 16.

Before the tournament started Bryan Habana, the hero of the 2007 triumph, placed the scenario on a par with Nelson Mandela handing the trophy to Francois Pienaar at Ellis Park in 1995.

“If South Africa go on and win with Siya Kolisi as the captain, it will be absolutely monumental. For us as a country to have that inspiration, for 70 per cent of our population to have that example, would be immensely important – on a par with Mandela in ‘95 if not greater. It would be historic.”

Unlike Habana, who was at Ellis Park in 1995, Kolisi revealed after their 19-16 semi-final win over Wales that he watched the 2007 final when South Africa beat England in Paris from a tavern in a Zwide township.

Kolisi’s mother, Phakama, was 16 when Siya was born and his father, Fezakele, was in his final year of school. Kolisi’s mother died when he was 15, leaving his late grandmother, Nolulamile, to raise him.

In an interview in the Japanese media before the Rugby World Cup, Kolisi said, “It’s tough to stay on the right path because sometimes hunger makes you do things that you never thought you would do. Some of my friends would steal and some passed away because they got into bad things.”

Kolisi “never dreamed of being a rugby player” as a child and now says the sport was “my way out”. After trying rugby for the first time when he was seven years old, Kolisi not only quickly took an immediate liking to it, but stood out so much that at the age of 10 he was spotted by his primary school trainer, Eric Songwiqi, who brought him up to the local club, African Bombers.

At the age of 12, Kolisi impressed scouts at a youth tournament in Mossel Bay and was awarded a bursary at the leading Port Elizabeth rugby school, Grey High, where Ireland’s incoming attack coach, Mike Catt, was also once a pupil.

Kolisi’s star grew through the Eastern Province Kings youth set-up between 2007 and 2009. He played in the famed Under-18 Craven Week and for the SA schools team before being offered his first contract at Western Province at age of 18 by Rassie Erasmus.

Kolisi played for the South African under-20s side in the 2010 and 2011 IRB Junior World Championships, and in 2012 he graduated to the Stormers squad before making his Springbok debut in June 2013 against Scotland at the Mbombela Stadium in Nelspruit. He replaced the injured Arno Botha in the fifth minute and was named man of the match in a 30-17 win.

Erasmus appointed Kolisi as the Springboks’ first black captain in its 126-year history in May 2016, and in Saturday’s final he will win his 50th Test cap.

Kolisi married Rachel Smith, a former marketing executive, in 2016 and they have two children from their inter-racial marriage, a son Nicholas Siyamthanda (four) and daughter Keziah (two). Since 2014, his half-siblings, Liyema and Liphelo, children of his late mother, have been part of the Kolisi household, after five years in orphanages and foster care in Port Elizabeth.

All the while, Kolisi’s roots remain in Zwide, which he frequently revisits.

“He was from my primary school, Emsengeni Primary, and I took him to the local club, African Bombers. I also coached him there,” Songwiqi said last week.

“Even then, he showed discipline and those leadership qualities. Working with the other boys, they understood one another. There were two other boys who also did well. But Siya as an individual, I could see he would reach the highest point in life in rugby.

“Looking at his attributes and the commitment he showed, I could see that he could make it one day; the dedication and that enthusiasm. He was so passionate about what he was doing.

“When we heard the news [of Kolisi being made captain], it was an exuberant moment in the Zwide community, knowing him, and that he was a disciplined boy. He has ploughed back into the community, and the school where he played rugby. He is not looking after himself alone.

“He looks after the poorest communities and clubs in Zwide. He is playing a vital role to change the lives of youngsters and players.”

Before the semi-final, South African president Cyril Ramaphosa made a video call to Kolisi in which he wished the Springboks well ahead of the semi-final against Wales, prior to which Kolisi dedicated their performance to the people of South Africa.

“We have many different races in our country, and we have 11 official languages. It’s one of the positives in our country; it’s really beautiful and that’s why we’re called the Rainbow Nation. We have different races in the team as well, which is really beautiful, and I think it’s very important for the country for us to do well, and for us as a team.

“It just shows that when we decide to work together for one goal as a team or a country we can make anything happen. We can achieve all our dreams or goals. That’s why we want to give our best this week and hopefully do the same in the final.”

Kolisi has endeared himself to supporters back in South Africa with his regular messages and insights into the squad on social media, and in the aftermath of the Boks’ win over Wales he posted a video of the squad celebrating in the dressing room.

“We just want to say thank you so much for your support. It really means a lot to us. We gave our best today for you and please one more week to go, six more days... Keep on supporting us and send the messages. We appreciate it,” Kolisi said with his team-mates in the background.

Ramaphosa will be in attendance next Saturday. Pressure? More like inspiration, and with Kolisi as captain, plenty of it.