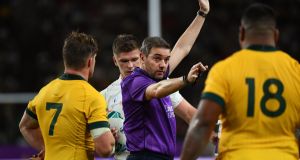 Jérôme Garcès will become the first Frenchman to referee a World Cup final when he takes charge of Saturday’s match between England and South Africa in Yokohama.

It is an appointment that, based on the results of the sides in the last four years when he has refereed them, will please England supporters more than Springbok fans who were dismayed when he was given last Sunday’s semi-final against Wales.

South Africa won that match with a late penalty, but they had only won one of the previous 10 Tests in which he had refereed them, including the 37-21 defeat to England at Twickenham in 2016. He controlled England’s quarter-final victory over Australia.

Garcès was in charge when England lost to Wales in the 2015 World Cup, a defeat that sent them towards the exit door of the tournament they were hosting, but since then they have won five of the seven Tests when he has been the referee, including the 32-20 victory over Ireland in Dublin at the start of this year’s Six Nations. He was in the middle when the Lions won the second Test in Wellington in 2017 to level the series with the All Blacks and sent off Sonny Bill Williams for a dangerous tackle.

Supporters in South Africa launched a petition last week to have Garcès removed from the semi-final against Wales, not just because of the Springboks’ poor record under him but because of his handling of their opening match this tournament against New Zealand. And he sent off the centre Damian de Allende against the All Blacks in 2017 for a late and dangerous challenge, a decision that was later downgraded to a yellow card by a judicial committee.

“He is a good ref, not one-sided at all,” said the South Africa scrumhalf, Faf de Klerk. “We can learn from the semi-final and the first game as well about how he sees things. As players we should get into his head as quickly as possible to see how he wants the game to go and don’t get on his wrong side. It will be a massive contest and we will let him do his thing so the game should flow nicely.”

Garces will be joined by Romain Poite (France) and Ben O’Keeffe (New Zealand) as assistant referees and Ben Skeen (New Zealand) as TMO. “I am honoured and delighted to be appointed to referee the final,” Garces said.

Wales’s Nigel Owens, who refereed the 2015 final, had expected to be appointed with Wayne Barnes ruled out because of England’s involvement, but he ruled himself out because of a calf injury.

England’s Wayne Barnes will take charge of the third place playoff between New Zealand and Wales on Friday. Jaco Peyper, who was disciplined by World Rugby and scratched from the semi-final list after posing with a mocking group of Wales supporters hours after sending off the France lock Sébastien Vahaamahina in the Oita quarter-final, will run the line along with Pascal Gauzere.