Brian O’Driscoll: ‘We got a lesson in how to play knock-out rugby’ 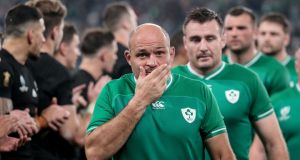 Ireland after defeat to the All Blacks in their World Cup quarter-final in Tokyo. “We got a lesson in how to play knock-out rugby, and how to play hard and physical.” Photograph: Dan Sheridan/Inpho

Brian O’Driscoll has called on Irish rugby to radically change its approach, and place an emphasis on skills, particularly passing, from grassroots level upwards.

In acknowledging that Ireland’s game did not evolve sufficiently in 2019 under Joe Schmidt, O’Driscoll has said this was the biggest lesson to be learned from the World Cup.

“Weirdly, it didn’t seem as bad second time,” said the former Irish captain of the All Blacks’ 46-14 quarter-final win. “Watching it live I thought it was tragic and then second time it was just those pressure points. With the way the All Blacks were playing I don’t know if we were ever going to win that game because that’s the differential between the two teams – if they’re on their game and we’re on our game they win.”

O’Driscoll highlighted Johnny Sexton’s missed touchfinder and “a brilliant bit of athleticism from [Richie] Mo’unga”, as well as the possible “14-point turnaround if Kearns doesn’t crowd Johnny”, as examples of those pressure points.

“So they taught us a lesson in passing, and that for me was the most stark contrast. I’ve never seen passing like that. Joe has always prided his teams on being good passing teams. On the basis of that we still have a long way to go because I don’t think I’ve ever seen a team as good at it, and it allowed them to play any sort of way. They could play that width-width game but then they were also pretty ferocious on both sides of the tackle.

“We got absolutely served up. We got a lesson in how to play knock-out rugby and how to play hard and physical. They grow with confidence when they score tries, there’s no chasing them when you’re 17-0 down. You know the game is over. They don’t concede simple tries.

“England showed the blueprint again, we’d done it previously – you’ve got to stay in front. When they get an early score it’s tough to turn it.”

The shortfall in passing was not, said O’Driscoll, confined to the Irish senior team. “We’ve got to have a rethink within our systems and our grassroots that that has to be more of a focus. It’s New Zealand’s greatest strength, the skillset of their teams, their under-age teams. They’re better passers than us.”

He cited examples of coaching at under-age camps, when he tells them: “Usain Bolt can’t run as fast as I can pass a ball. So why do you pass? To get people into space, to use the width.

“I think we still have some way to go. We’ve got some nice passers, but not everyone’s second nature is to throw a 10-metre pass without thinking. It’s just not. That has to become the norm, where it doesn’t matter what your number on your back is.”

Incorporating that into Ireland’s under-age game, he added: “It doesn’t need to be a knee-jerk but we’ve got to evolve the game, and that’s one way of making it easier, becoming very good passers of the ball.”

O’Driscoll maintains that over the last decade Schmidt’s tenure “has been immense”. Having cited all the many milestones, he said: “He’s driven Irish rugby, the Irish media, and the Irish public’s expectations to a level that maybe we don’t ordinarily compete at.

“That’s a good and bad thing because when you dip below it you leave yourself open to be chopped at the knees or given a hard time.

“He has absolutely maximised the potential of that team over the course of the six years with them. But yet, in the final year, he failed to evolve the team when he needed to.”

“On top of that, the team weren’t doing that gameplan as well, so it was a double negative,” said O’Driscoll.

This was compounded by being physically dominated by England last January. “I don’t know if our year ever recovered from that. It completely took the wind out of our sails after riding that crest of a wave from the New Zealand game. And the lack of evolution probably hurt us. It hurt him a bit because it felt as if we ran out of ideas.”

O’Driscoll, speaking in Tokyo on Monday in his capacity as an ambassador of the World Cup’s official partners Land Rover, said the trust placed in Schmidt by the players was understandable after his methods had delivered so much success, but he felt Ireland became too setpiece-focused as opposed to multi-phase.

“We were a bit risk-averse. You look at the off-load stats. We’ve got to make the game a bit easier for ourselves. You’ve got to try and push offloads a little bit more, encourage it and you’ve got to practice it.”

That aspect of Leinster’s game had evolved recently, he said, but “we’ve historically been poor offloaders”.

“That’s an obvious opportunity to evolve any gameplan; changing the point of contact and not having as many rucks, not making it as confrontational and using our skillsets or fast-feet of [Jordan] Larmour, [Jacob] Stockdale and [Keith] Earls, who didn’t seem to have a lot of opportunity in this World Cup.”

O’Driscoll, who has played with Mike Catt and worked with Andy Farrell, says the latter may be slightly on the back foot but will be given some leeway, albeit he and Ireland need success in the here and now. Nor can there be a cull of all the players who might not make the next World Cup, not least as “we don’t have eight or 10 ready-made replacements”.

“I think when you look at some of our best players coming to the winter of their career it creates a nervousness. Conor Murray, Johnny Sexton, Peter O’Mahony’s body looked pretty beaten up. But excitement comes with that opportunity of seeing more Joey Carbery, seeing more of whatever half-back comes in, seeing more of hopefully Dan Leavy getting back fit.”

Paul O’Connell has assured O’Driscoll that there’s a new wave of talent coming through the Munster academy, especially up front.

“There is reason to have hope. But am I immediately expecting a bounce back? I think there’s going to be a bedding-in process,” said O’Driscoll, who would be well disposed toward giving James Ryan the captaincy at 23, the same age he first led Ireland, but was more inclined to wait a year or so, with Sexton assuming the mantle in the interim.

As for Sunday’s final, O’Driscoll says wryly: “I’ll get hung, drawn and quartered but for the first time I think it would be great if England won. I said it would be great if you could get an England-Wales final, just for the world order, and it’s brilliant that England have beaten New Zealand. I think that was important, and the manner in which they did it all the more so.

“But I think the way England have played and the way they’ve progressed, it would be good if they were able to play somewhat like that and deliver a performance that was worthy of world champions.”

“Huge credit to South Africa for managing to get to a World Cup final the way they have played but,” he added with a wry grin, “we are trying to promote the game.”

Land Rover is Official Worldwide Partner of Rugby World Cup 2019. With over 20 years of heritage supporting rugby at all levels, Land Rover is celebrating what makes rugby, rugby. #LandRoverRugby