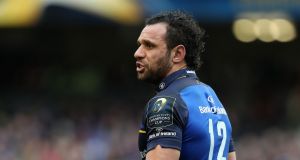 The iconic former Leinster full-back Isa Nacewa has expressed his view that the Irish team dipped from the heights of 2018, never recovering from the opening Six Nations defeat by England and thereafter reverted to a more conservative and less expressive brand of rugby.

Nacewa’s implicit criticism of Joe Schmidt will particularly hurt the recently-departed Irish head coach. The player was perhaps inadvertently instrumental in prompting Leinster to bring Schmidt to Ireland in 2010 by previously calling him “Mr. Rugby” and the biggest influence on his rugby playing career during their time together at the Auckland Blues.

“He taught me everything I know about back play,” he once said in an interview with The Irish Times.

Nacewa also won two of his four Heineken Cup medals, and a Guinness Pro12/European Challenge Cup double, in Schmidt’s three years at Leinster during the player’s first of two hugely rewarding spells with the province.

Speaking on Sky Sports, Nacewa was asked how did things become so bad so quickly for Ireland?

“They just never recovered from the heights they reached in 2018. It was eye-opening how far off the pace they were in that first Six Nations game against England when they downright got battered in Dublin.

“I think that was quite a telling story, because they never really took a step up from that. The performances when they did win in 2019, in the lead up to the World Cup, weren’t great and then they got it handed to them in a warm-up match against England, and that was a psychological blow to the Irish too.

“They just never managed to play the rugby they played in 2018 and that was the difference.”

Nacewa, who texted a few of his former Leinster teammates before the 46-14 quarter-final defeat by the All Blacks, sensed that they’d lost their belief, that they sensed their best rugby was in the past, during the course of the year.

“It did feel that way. In 2018 (they had) guys like James Ryan, Dan Leavy coming through - they missed Dan Leavy and Seán O’Brien at the World Cup. It was the belief that they had. There was no fear no matter who they played. It didn’t matter if it was the All Blacks, a lot of those guys had never experienced any lows. Some of them went through the entire 2017/18 season without ever losing a match.

“A lot of people said, the only way from that position is down and the fact they’d to take a couple of hard losses to learn the stark reality of professional rugby – that sort of came to fruition in a year that wasn’t the build-up to a World Cup they needed.”

The Auckland-born utility back won 183 caps for Leinster in two spells of five and three seasons with the province, and in what seemed like something Nacewa wanted to get off his chest, he was asked if, at some point, the structure and reliance on structure became a weakness.

“I definitely think it did, in the 2017/18 season once Leinster started playing an attacking brand of rugby and the majority of the Ireland squad was Leinster-based they let a little bit of that Leinster flair infiltrate the Ireland camp.

“Joe started to go away from his tried and trusted drills and introduced a bit of what we call unstructured play. That came into Ireland camp in training and in the Six Nations and they were throwing off-loads. There was continuity to their play.

“That got them all the way to the top of the world and an unbeaten year with all the trophies. Post that, I hear they actually went away from that and started to take it back out and went back to the conservative approach and that’s just shone through the whole World Cup and 2019.

“He went back to the tried and trusted of what worked for the last six years and I just don’t think they were expressive enough.

“They didn’t have the right ball players and the likes to play that flowing rugby that Johnny likes to play, likes to drive. They lost key players in certain positions and they just never got their flow on.”

Moving on to this Saturday’s first semi-final between the All Blacks and England, Nacewa said: “After their performance on Saturday, if the All Blacks hit the heights in their attack - and I don’t know if that’s possible because it was so good - the lethal edge of their attack is stronger than the defences out there.

“It’s too good, but if they don’t hit those heights and it will be hard, then I think it will be a see-saw battle. I hope it is. I strongly believe that whoever wins this match will go on and easily win the World Cup.”