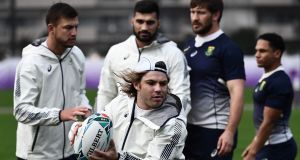 As seemingly thousands more English fans descend on Tokyo, with more to come and many of them without tickets, their team’s defence coach John Mitchell has labeled next Saturday’s World Cup final against South Africa as a meeting of the two most powerful sides in the global game.

In a nomadic coaching career which even included a short stint as the Irish forwards coach under Murray Kidd in 1996, Mitchell has coached in Auustralia, England, the USA and his native New Zealand. He spent two years in South African rugby from 2010 to 2012 coaching the Golden Lions, and returned there to coach the Bulls for a year before Eddie Jones brought him aboard the English coaching ticket in September last year.

Mitchell had “no doubt” Saturday’s final will be another brutally physical encounter.

“What we do have or what we are going to witness are the two most powerful rugby teams in the world. They are strong, well-coached, the gain line is going to be huge. It’s a testament to both sides. Going back to our DNA, we feel it’s really important to us. We feel there is more to bring out and we are still going to have to work hard for each other.”

After England’s master class in their 19-7 semi-final victory which dethroned the All Blacks last Saturday, Mitchell acknowledged that the Springboks direct style will ask different questions of his team’s defence.

“They play in a particular way, but you must always be prepared for anything that comes to us. They have a very clever nine (Faf de Klerk), who is sharp. Polly (Handre Pollard) is in really, really good form. They have four secondrowers who love winning the gain line. They have their own armoury. It’s exciting. Last week, we dealt with a lot of speed, a lot of footwork. This week they are certainly going to be a team that is more direct.

“Pressure is definitely coming to come, that asks questions of your fundamentals, so that comes down to our core basics that are really importing to us - supporting your mate on the floor, in the carry, is really critical with the pressure likely to come in the air and on the floor.”

Although Owen Farrell, Jonny May and Kyle Sinckler all had their training load tailored on Tuesday in advance of their main session tomorrow, Mitchell confirmed that England will have a full squad to choose from.

“I can’t see any of them being doubts at this point.”

Reflecting on England’s performance against the All Blacks, Mitchell said: “It was a good performance, certainly one that’s needed when you play New Zealand because they are a huge run and pass team and their attacking kicks is part of their attacking repertoire as well.

“The guys were able to work hard for each other. Everyone says the hits and the contact, but the stuff that excites us the most is the work off the ball, the extra contributions to look after your mate. And even more so in the more difficult situations where we had to scramble at times.”

At face value scaling those heights again a week later may be difficult, but Mitchell maintained: “We are really excited by the week. In reality, all we have done is present ourselves with another opportunity at the right end of the tournament. We want to get better and we feel we can get better as well.

“Like every opposition in this competition, they come with different threats and present different opportunities. We’ll just say focused on what we have to do, how we go about it, take it day by day. Everyone is really calm and eager to get onto their work, we just got to go and earn it now.”

Speaking to the media, Mitchell was unaware that Jérôme Garcès, as expected, had been chosen to referee the final, the first Frenchman to be given the honour. Garcès will be joined by his compatriot Romain Poite and New Zealand’s Ben O’Keeffe as assistant referees and another Kiwi, Ben Skeen, as TMO.

“I am honoured and delighted to be appointed to referee the final,” Garcès said. “It is a dream as a referee, but this is a team sport, and as a team of four, we will be out there to do the best for the teams, the fans, the sport, but also the entire match officials team, selectors and support team, who have worked so hard over the last four years.”

England’s Wayne Barnes will take charge of the third-place playoff between New Zealand and Wales on Friday.

The South African referee Jaco Peyper, who was not considered for the semi-finals after posing with Wales fans mimicking his red card decision in their quarter-final win over France, will be one of his assistants, along with Pascal Gauzere of France, with South Africa’s Marius Jonker as TMO.