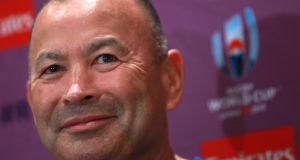 In a pre-final waltz worthy of Fred Astaire and Ginger Rogers the players, coaches and backroom staff of England and South Africa have all packed their bags and moved across Tokyo to the hotel their opponents have just vacated. For the English contingent it is farewell, folks, to their Disney resort base while the Springboks say konnichiwa again to Mickey and Minnie Mouse.

These things are not entirely scientific but living next to the Magic Kingdom did not do Eddie Jones’s squad any harm last week.

While the Springboks’ management will hope the same spell is cast upon them in the build-up to Saturday’s final, they also know the alchemist-in-chief has relocated across town. Jones has already experienced two World Cup finals as a coach and knows precisely which buttons need pressing this week.

It is his firm belief, for a start, that no one ever needs motivating in the lead up to a World Cup final. Jones took Australia to within a Jonny Wilkinson drop-goal of beating England in 2003 and helped South Africa over the line as a hastily-recruited consultant in 2007; both campaigns taught him that, in final week, less is more.

“It’s always about doing less. Coaches tend to think they’ve got to do more but it’s about making sure we don’t over-coach the players and let them find their own rhythms.

“It’s about doing certain things right, keeping the players fresh physically, keeping them fresh mentally, making sure they have enough to do off the field. We need to make sure they’re physically fresh and mentally clear, have the game plan in their head, know how they want to play and are aware of the challenges ahead. Our players will be ready to go.”

It was equally instructive to hear Jones argue that, far from easing up, he thinks England can raise their level again this Saturday. If that sounds improbable given the staggering effort that went into beating the All Blacks, he reckons the intense fitness regime they have undergone since the summer is now paying off. “The great thing about our players is that, physically, they are in fantastic condition. Their ability to recover is extraordinary. I wouldn’t hesitate to say our training’s going to be to a higher standard this week than it was last week. That’s how good a condition we are in.

“Look, we played a great team on Saturday but we don’t feel we’ve played as well as we can. The challenge for us is to keep improving. As you go through the tournament, the margins get smaller but the improvements you can make are still significant. We’re looking to see how we can keep improving for this week’s game and that’s the exciting part for us.”

With Jones there can often be a touch of judicious top spin – he was once a decent off-spinner back in Randwick – but self-belief is now oozing from every English pore. New Zealand could find no way back in Yokohama partly because England kept on coming.

Tom Curry, Maro Itoje and Billy Vunipola all played the full 80 minutes yet already look in more than decent shape again. “The big thing for us is holding back the players this week and making sure they don’t go before the siren rings,” stressed Jones.

“That’s why we can be fairly relaxed this week. We’ve done a lot of hard work, we know what’s ahead of us, we know we can play to our strengths and we’ve got a pretty good idea of what we take away from the Springboks game [against Wales]. The only thing we are really worried about is how the Springboks turn up on Saturday. They won a tough semi-final and when you are in the final of a World Cup, you have done a lot of things right.”

Nor is Jones in much doubt as to how Rassie Erasmus’s side will look to confront England. “They are a massively aggressive, physical forward pack and they probably played their stronger team in the second half as opposed to the first. There are not many Springbok teams that don’t come through the front door. So we’ve got to be ready at the front door and have enough cover at the back door, too. Rassie is a cunning coach and has done a great job with the Springboks. We’re prepared for the unexpected . . . they are going to be a difficult side to beat.”

Working in England’s favour, though, is something Erasmus can do absolutely nothing about. While Jones’s popularity with the Japanese public was already stratospheric prior to the tournament, the All Blacks’ semi-final demise has now guaranteed England further neutral support.

Jones, in addition, says his squad want to give the country – or at least the English part of the UK – another boost at a time of significant political turmoil. “With Brexit at the moment they probably need something to cheer about. It’s a job of the team to make the country happy.” A tense World Cup final may await but Jones has rarely sounded so completely at ease.