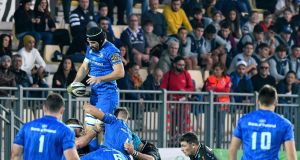 A 20th-minute Ross Byrne penalty handed Leinster the spoils in a lacklustre Guinness Pro14 encounter with Zebre at Stadio Lanfranchi.

In a game that was devoid of clearcut try scoring opportunities, Byrne’s place-kick was enough to keep the defending champions at the summit of the Conference A table.

Though Cullen will be happy Leinster emerged with a fourth consecutive win to their name, this was the first time since April 2016 – a 30-6 defeat to Ulster in Belfast – that they have failed to score a try in a competitive league game.

Conversely, Zebre were agonisingly close to securing their first Pro14 success since getting the better of Edinburgh exactly 12 months earlier.

An extended spell inside the Zebre 22 had created early momentum for the visitors and it seemed like only a matter of time before they broke the deadlock.

However, Byrne knocked on a Jamison Gibson-Park pass just shy of the line and Cian Kelleher couldn’t touch down the scrumhalf’s kick through on 13 minutes.

Nevertheless, Leinster continued to dominate possession as the half wore on and the blues eventually got up and running courtesy of Byrne’s routine penalty. While this lead was richly-deserved, the defending champions didn’t have it all their own way in the opening period.

Mattia Bellini’s powerful break edged Zebre into the opposition half and Leinster were relieved to see flanker Johan Meyer losing the flight of the ball on the left-wing. A turnover penalty helped them to re-establish a foothold in enemy territory and Ross Byrne’s kick to touch in the closing stages of the half provided them with a perfect platform in attack.

Yet, Zebre’s committed defence held out under intense pressure and Leinster had to be content with a 3-0 interval cushion.

Five minutes after the resumption, Zebre winger Edoardo Padovani was agonisingly close to gathering Carlo Canna’s audacious crossfield kick. This was a let-off for the holders but, as the action progressed, they increasingly found themselves on the back-foot.

The Italians developed a series of multi-phase moves and it took remarkable discipline on Leinster’s part to avoid the concession of a kickable penalty. Patient build-up play provided Michael Bradley’s men with a realistic chance of ending their lengthy losing streak.

Yet, Leinster dug deep to secure another turnover penalty on the stroke of 80 minutes and this was enough to squeeze them over the line in a forgettable affair.