South Africa muscle past Wales to tee-up final against England 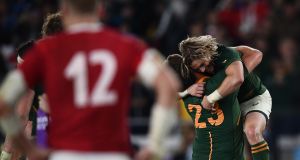 For several seconds after Handre Pollard tapped the game’s final penalty, kicked the ball dead and Jerome Garces’ whistle signaled the end, Alun Wyn Jones and the Welsh players stood with their hands on their heads, alone with their thoughts.

For their skipper and Wales, this was a three-point semi-final defeat to go with a one-point defeat at the same stage in 2011.

Like a dog with a bone, they never let go - never leading but thrice drawing level, notably when rewarded for their decision to go for a scrum when working Josh Adams over in the corner. Even as their injury ravages mounted they dug deep and died with their boots on.

Meanwhile, in just 25 matches in charge, Rassie Erasmus has guided what was a disorganised rabble into World Cup finalists.

That’s some achievement, but you felt for Warren Gatland and the Welsh here after their challenge ended anti-climatically with three penalty decisions by Garces deciding their fate.

Wales’ try was a typically gutsy response to the Boks’ try when the game’s match-winner Handre Pollard finally deviated from sitting in the pocket and launching bombs to run at the Welsh defence.

In truth, this semi-final was an awful spectacle, with 81 kicks from hand (41 by Wales to 40 by the Boks), most of them seemingly quite aimless. As expected though while Wales were digging deep into their reserves the Boks’ superior strength in depth was demonstrated by the impacts of Malcolm Marx, Franco Mostert, Francois Louw and co.

From the start, it was everything we feared it might and were forewarned it would be - the scrumhalves exchanging box kicks ad nauseum.

Alun Wyn Jones set the tone for Wales when ending a Boks’ attack by earning a penalty against Willie le Roux for not releasing in the jackal.

What little bit of wit and width there was came from Wales as they twice outflanked the right side of the Springboks’ defence. A lovely cut out pass by the returning Jonathan Davies released Josh Adams but his pass inside to Leigh Halfpenny was adjudged marginally forward.

Gradually though, the Springboks began to crank up the power in their scrums and mauls, and the penalty chances came Handre Pollard’s way. After the Boks launched S’busiso Nkosi, in for Cheslin Kolbe, up the middle Justin Tipuric was pinged for not rolling away.

Dan Biggar did level matters with a fine penalty from near the left touchline after Wales again released Adams and Le Roux was blatantly offside. But Ross Moriarty spilled the ensuing restart and Pollard quickly restored the Boks’ lead with a scrum penalty.

Ala the first semi-final, there was a rendition of The Fields on the half-hour, easily heard as by now the crowd long since settled into something of a torpor, before Pollard made it 9-3 for side entry by Ken Owens as the Boks’ maul gathered momentum.

Already struggling in the scrums, Wales then lost tighthead Tomas Francis, but at least they had some joy from another Davies box kick when Dan Biggar, supreme in the air, climbed above Duane Vermeulen, and offloaded to George North. Faf de Klerk made an important tap tackle which led to North eventually hobbling off with what seemed like a hamstring injury.

Biggar did made it 9-6 at the break after Duane Vermeulen tackled Aaron Wainwright without the ball, but Wales were being held together by sticking tape. There’s been 40 kicks from hand, one a minute, with 21 by Wales.

And so it continued, as reclaims or mistakes under high balls dictated the flow. When de Klerk dropped a high ball and then the Boks were guilty of side entry Biggar - after an unlikely tete-a-tete between de Klerk and Jake Ball which at least passed for entertainment with the crowd - leveled matters.

There were then three charged down kicks in a minute before le Roux dropped one before the Boks turned to their bench and began running instead of kicking.

After Malcolm Marx carried hard off a maul, Pollard was the source in chief, running hard and offloading off the deck, then carrying hard again to earn a penalty advantage, which Damian de Allende used to full effect by powering through the tackles of Biggar and Tomos Williams. Pollard converted.

But when Dillon Lewis earned a penalty against Franco Mostert for not releasing, Rhys Patchell went long to the corner. A remorseless, narrow, 20-phase attack earned a close-range penalty, from which Alun Wyn Jones opted for a scrum, to huge roars.

It paid off, Faf de Klerk tried to prevent Moriarty feeding Williams on the blindside but failing to do, giving a three on two for Davies to put Adams, the tournament’ leading try scorer, over in the corner. Halfpenny then landed the difficult conversion.

A big play by Rhys Carre, ripping the ball in a tackle, led to a ten-phase attack before Patchell pulled the trigger on 72 minutes with a drop goal, but it was well short. Instead Franocis Louw won a penalty in the jackal, their maul earned another for side entry and Pollard nailed the 45-metre penalty from wide to the left in the 76th minute.

Pinned in their own 22, Wales couldn’t escape when pressure from Mostert prevented Alun Wyn Jones from claiming the throw, and when Wales were pinged for wheeling the Boks’ scrum, that was it.

Golf courses to close under Level 5; Andy Farrell names team for Italy clash 07:52
Connacht coping with Covid case and injuries ahead of trip to Edinburgh 07:00
Dundalk quietly confident ahead of Europa League opener 06:00
Molde unlikely to see themselves as also-rans as they face Dundalk 06:00
Measured approach sees Ireland women’s rugby squad taking shape 06:00
Crossword Get access to over 6,000 interactive crosswords