Australia v Ireland - all you need to know about series decider 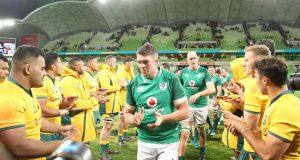 Australia won 18-9 in Brisbane, Ireland responded with a 26-21 victory in Melbourne a week later and so the first ever three match series between the countries is beautifully poised going into what promises to be the decisive match in Sydney. Ireland who currently house the Grand Slam, Triple Crown, Millennium Trophy, Centenary Quaich and the Admiral Brown trophies, will be looking to add the Lansdowne Trophy, which goes to the winners of matches between Ireland and Australia. In the event of a draw in Sydney Ireland as holders would retain the trophy.

Our live blog will be in full flow 30 minutes before the match starts on Saturday. If you’re in front of a TV, however, you can tune in to Sky Sports Action and Main Event channels in time for the 11.05am kickoff.

The Team of Us

Injuries necessitated a number of changes, Garry Ringrose (foot) is replaced by Bundee Aki with Robbie Henshaw switching to outside centre where he lined out in the first test; it’s a reprise of the midfield partnership from that day.

Jacob Stockdale was ruled out of the second test but returns, while the player who deputised Andrew Conway in Melbourne picked up a hip pointer injury in the act of scoring a try. Dan Leavy’s injury has prompted a reshuffle in the backrow, Peter O’Mahony and CJ Stander moving to openside and blindside flanker while Jack Conan starts at number eight. Jack McGrath swaps places with Cian Healy, taking the starting jersey, while Sean Cronin gets his chance at hooker. Ross Byrne is in line to make his debut off the bench.

The Team of Them

Australian coach Michael Cheika has made two changes to the starting team with Lukhan Tui, a replacement last week, promoted to a starting role at blindside flanker. This will see David Pocock don the number eight jersey although that is unlikely to have a material impact on the way that he plays the game. Scrumhalf Will Genia’s fractured arm means that Nick Phipps will be in the run-on team - as the Aussies like to say - and that Joe Powell will be looking to win a fourth cap off the bench; the latter once again contains a 6-2 split favouring forwards.

A Wallaby with Irish Roots

Speaking of Joe Powell, the Wallaby reserve scrumhalf enjoys an affinity with Ireland from a heritage perspective as he has dual status and holds an Irish passport because of Irish grandparents. He explained: “For me to play against the Irish is special because my grandparents were Irish so I’ve got my Irish citizenship as well. We have relatives over there; I’ve met them, got a couple of cousins in Ireland. If I do get the opportunity to play, it will be the biggest game I’ve played in, a big decider, so it’s exciting.”

In terms of his cousins he also boasts a rather famous one in Katrina Powell, a three-time Olympian with the Australia women’s hockey team with whom she has won two gold medals.

Battle For The Skies

Australian backs’ coach and former World Cup winning outhalf with the Wallabies Stephen Larkham first brought up the subject early in the week and coach, Michael Cheika revisited the issue during the press conference to announce his team for Saturday, both suggesting that Ireland were guilty of illegally blocking or checking Australian players as they chased high balls. Wallaby fullback Israel Folau, who had been superb in the aerial ping pong in the first test, ruling the skies, was a peripheral figure in the second.

This is a classic and slightly dog-eared Aussie tactic - one that they have often used in the past - to try and subtly influence the referee or at least focus his attention on a certain area of the game in the hope that they’ll benefit from an increased scrutiny on the opposition. It’s interesting that Folau had no issue with the Ireland players and felt that the Aussie’s were guilty of poor punting rather than being illegally blocked. A player doesn’t have to get out of a chaser’s way as long as he doesn’t change his running line or if stationary deliberately step into the chaser’s path.

Man in the Middle

The officiating of referees Marius van der Westhuizen (South Africa) and Paul Williams (New Zealand) came in for plenty of critical analysis after the first and second tests. Having had two Southern Hemisphere referees in the first two tests, France’s Pascal Gaüzère will preside over Saturday’s game. The three officials have been in situ for the test series, working as a team, and taking turns with the whistle. It’s likely that over a dinner or 15 they have discussed the peccadilloes of both Australia and Ireland.

Balance In The Backrow

Ireland captain Peter O’Mahony, winning his 50th cap, switches to the number seven jersey in the absence of Leavy. The Cork man was brilliant over the ball last week in forcing the Wallabies to concede turnovers and penalties and will need a similarly influential display. CJ Stander switches to blindside flanker with Jack Conan coming in at eight - they may swap roles from time to time, given Ireland two big ball carriers in the pack. It’ll be instructive to note how they blend.

Michael Cheika has promoted Lukhan Tui thereby providing more ballast and power but the remit for Ireland remains denying Michael Hooper and David Pocock poaching opportunities. Ireland’s clearing out needs to be Furlong-esque in its aggression and accuracy.

Ireland coach Joe Schmidt has challenged Cronin to lay down a marker for a jersey in the future. Forget about the conjecture about why he didn’t make the match day squad for the second test. He has a chance to prove a point in this test match and ignore what’s gone before. Set-piece will be crucial and while it’s success or failure is never down to one person, it is the ability to discharge the basics competently in this aspect of the game that is fundamental to the team success.

It wins matches. Two yellow cards the last day and a double figure penalty count understandably falls a little short of the standards driven by the Irish coaching team and players. Ireland need to make sure that the penalty count doesn’t stray into double figures. It’s an area that Australia will have targeted too. Small margins in Sydney.