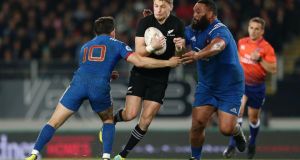 Beauden Barrett of the All Blacks on the charge against Anthony Belleau and Uini Atonio of France during the Test series. Photograph: Anthony Au-Yeung/Getty

All Blacks flyhalf Beauden Barrett and loose forward Vaea Fifita will not travel with the team to Dunedin for next week’s third test against France due to concussion.

Barrett’s absence was not unexpected after the versatile back failed a head injury assessment (HIA) during the 26-13 series – clinching second test victory in Wellington on Saturday when he landed heavily while attempting to catch a high kick.

France’s Benjamin Fall was shown a red card for the 12th minute incident when he collided with an airborne Barrett and the fullback is to face a disciplinary hearing later.

Coach Steve Hansen said it was probably best that Barrett recuperated at home and may not join the team at all in Dunedin. “Beauden has still got concussion symptoms,” Hansen said yesterday.

“There’s no point putting him under extra pressure of the travel, when he can stay at home and rest and come down tomorrow or not come down at all.

“We won’t take any risk with him. It’s a long season and you’ve got to weigh up the risks and rewards and it’s unlikely that we’ll use him if he’s not right.

“Even if he’s 100 per cent and there’s still some grey area there, we won’t use him, and that’s been the case with most of the head injuries we’ve had.”

Loose forward Liam Squire was also “touch and go” for the third test with a shoulder injury, prompting the uncapped Jackson Hemopo to be brought into the squad as cover.

Wellington Hurricanes hooker Ricky Riccitelli has also been drafted in with Nathan Harris returning home to attend the birth of his first child.

Inside centre Sonny Bill Williams could be on track for a return for the game in Dunedin, after initially being ruled out of the series following knee surgery. Williams trained with the side all week in Wellington.

Hansen has also already said that he would likely experiment with his lineup for the third test as he gives some of his more inexperienced players game time as he continues his World Cup planning.

The All Blacks, however, played poorly in Wellington despite having a man advantage for almost 70 minutes, something the coach acknowledged.

“There have been worse All Blacks performances I’ve been involved in,” he said. “The big thing is we won’t panic. “We played poorly and won a series, so that can’t be all bad.

“Whilst we’re disappointed, we’re still managing to do things that are positive. What we’ve got to do, as I said before, is go away, have a good look at what we’re doing, learn from those things and get better at it.

“History would suggest we’re not bad at it.”– Reuters