November Series: Ireland to play All Blacks in 7pm kick off 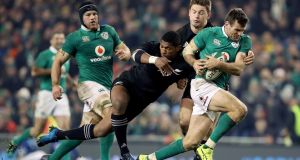 Ireland have announced they will play Argentina, New Zealand and USA in this year’s autumn Guinness Series in three evening matches with the game against the All Blacks kicking of at 7.00pm in Aviva Stadium on November 17th.

Ticket prices have increased since last year and since the All Blacks came to Dublin in 2016. In 2016 a category 1 ticket for the game was €95 with a premium level seat costing €120.

This year a seat to see New Zealand play in Aviva will cost €110 for a category 1 stand ticket and €135 for premium level.

Joe Schmidt and his side first face the 10th ranked side in the world, Argentina (category 1 €75, premium €95), who return to Dublin 12 months after losing to Ireland 29-19 in front of a sell out crowd.

The win was Ireland’s first over the All Blacks, who are currently ranked by World Rugby at the best team in the world with Ireland ranked in second place.

In the final match of the series Ireland face USA (category 1 €40, premium €55), who will be making their debut in Aviva Stadium. It is the Americans’ first visit to Dublin for 14 years, when Ireland won 55-6.

Since then the sides have met four times in the USA, all of which Ireland have won. The 15th ranked USA recently achieved one of the best results in their history, when they beat seventh ranked Scotland 30-29 in Houston.

It was America’s biggest international scalp since they defeated France in the Olympic final of 1924.

In addition to the three matches in Dublin Ireland will return to Soldier Field in early November to face Italy as part of The Rugby Weekend Triple header.

Tickets for the Guinness Series 2018 will go on general sale on ticketmaster.ie on Friday, June 28th at 10 am.