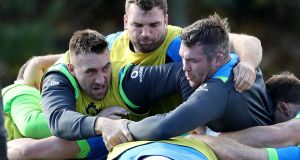 Joe Schmidt has made five changes in personnel and also four positional switches to the Irish team for Saturday’s series decider against the Wallabies in the Allianz Stadium (kick-off 8.05pm local time/11.05am Irish).

Despite being told that Ireland would have a full deck, or virtually so, to pick from, it transpires that four players were ruled out through injury - Iain Henderson (knee), Dan Leavy (sternum), Garry Ringrose (foot) and Andrew Conway (hip).

This has forced the Irish coach’s hand to some degree, with Bundee Aki and Jacob Stockdale coming back into the team as Robbie Henshaw reverts to outside centre and Keith Earls to the right wing. Jack Conan comes in at number eight, with Peter O’Mahony shifting to openside and CJ Stander to blindside. Jack McGrath and Sean Cronin have also been picked in the frontrow.

Leavy’s loss is a blow, if just for his physicality and high tally of carries and tackles, and leaves the back-row looking a little imbalanced. O’Mahony, who will be making his 50th appearance for Ireland, has never previously started at seven, although that being said, the way he won three turnovers last Saturday at the breakdown was classic openside play.

Ringrose also brings some additional footwork to the outside attack, and also makes good defensive reads. But Aki and Henshaw thus renew their old Connacht partnership again, having done so in the former’s debut against South Africa last November, the opening two games of the Six Nations against France and Italy, and the first test defeat in Brisbane when Henshaw reproached himself for a couple of missed tackles when shooting out of the line.

John Ryan has been preferred to Andrew Porter on the bench, where Tadhg Beirne has been retained, with Kieran Marmion returning to the match-day squad and the uncapped Ross Byrne is in line for his test debut.

“There were a number who couldn’t train on Tuesday which affected how the players would have kicked on in the starting 15,” said Schmidt at the team’s hotel base in Sydney’s Central Business District area, with more pleasant weather having returned in the last two days save for another early morning blast of rain.

“Andrew Conway is still debilitated by that hip pointer in the action of him scoring the try early in the second Test. Iain Henderson hasn’t recovered sufficiently from the knock on the knee. Dan Leavy was unavailable and Garry Ringrose was unavailable with a foot injury.

“Those four guys were unavailable, and some other guys were patched up during the week at various times and we’ve got a 23 that we’re pretty excited about, knowing that the Australians are going to have a super outfit as well. It’s going to be a real Test match to decide the series.”

Individually, this looks like a hugely significant game for the restored Cronin and Conan in particular, with the head coach having made it abundantly clear that Cronin needs to improve his set-piece work, particularly bearing in mind that costly 68th minute scrum in the first.

“We’d love to see him do really well in the set-pieces. We obviously had Niall Scannell doing really well last week and Rob Herring has been super, I thought his performance off the bench last week was really good.

“The other thing from Sean is that dynamic ball-carry, that dynamic line speed he can bring and he’s an incredibly combative character, so we’re looking forward to seeing all those elements really.”

Regarding the composition of the backrow, Schmidt said: “I thought Peter did really well over the ball last week, it’s something that he’s very capable of doing. It maintains the lineout presence that he offers, the leadership that he’s brought to the team through this series.

“With Dan Leavy unavailable, it was probably just an opportunity for Jack Conan to get in at number eight. Once he was in at number eight and trying to maintain a bit of continuity through the spine of the team, CJ Stander shifted to six and Peter to seven.

“Having said that, we felt that Jordi Murphy came off the bench really well last week. He played the week before, so his game volume is quite high and we decided, well there were a number of things to balance really. We were waiting to see how Dan came through the week, he’s had very little time on tour out on the pitch and unfortunately, that wasn’t to be.”

Schmidt confirmed that the coaching staff had planned to give Joey Carbery a start and Byrne a chance off the bench; "we’ll see how the game is going as to how much and what it looks like for Ross to get onto the pitch but he’s trained really well.

“He’s a smart kid, he’s picked things up really quickly, he’s been flexible. He’s had to move around a little bit, which has given us confidence because whenever you’re putting someone on the bench, to have some sort of flexibility to play a couple of positions is really important.

“That’s been an asset as well, having Ross move around a little bit from 10 to 12. If he can cover those two, Jordan Larmour just about ticks every other box.”

Wallabies coach Michael Cheika has made two changes to his starting side, as David Pocock shifts to number eight to make way for Lukhan Tui at blindside flanker while Nick Phipps will start in the number nine jersey after Will Genia suffered a fractured arm in game two.

It will be Tui’s first test start after six caps off the bench, whereas Phipps brings plenty of Test experience and will be linking up with his fellow Waratahs’ backs Bernard Foley, Kurtley Beale and Israel Folau.

Joe Powell will aim to add to his three Test caps after being named on bench as back-up to Phipps, as Cheika against opts for a 6-2 split, for what will be Ireland’s first meeting with Australia in Sydney since 1994, when the Wallabies won 32-18 at the Sydney Cricket Ground.

“We probably have a slightly different mindset about what this tour means for us,” said Schmidt, “and the opportunity, as well as the responsibility to provide the best performances we can, the opportunity for players to put their best foot forward.

“I thought Tui did well when he came on. He gives them a little bit more in the lineout if he’s playing in the loose or if he is a lock, I thought he came on and there was one time where Tadhg Furlong carried and I thought Tui hit him very, very hard - it’s hard to slow the Wexford farmer down but he fair stopped him.”

The Irish camp are a tad indignant about the claims emanating from the Wallabies camp that they blocked Israel Folau from contesting in the air last Saturday, and this issue was again raised at Schmidt’s press conference,

“I’d leave it to you guys to have a look and see what you think. We don’t believe that there is anything illegal going on there, guys have every right to come back directly onside and we just worked a bit harder getting back, knowing that one of the things is that when Israel does win the ball you have got to get someone in behind it.

“Otherwise you are going to be in trouble, because I have seen some fantastic footage of him in recent times where he takes a kick-off and then runs another 30m because he is so quick when he hits the ground to get running again.

“So, we had a real urgency to get back in behind the ball and get support of the ball receiver.

“I’ve no doubt that they’ll have the same urgency, that’s part of the intensity of what gets brought to a Test match.”

Asked if Ireland could raise their intensity levels again on Saturday, Schmidt said: “I was pretty impressed with the intensity, but I’d have to say that the first Test was pretty intense as well. We measured up for a long time in that match and I have no doubt that the Australians will demand intensity. If we bring anything less, it’s going to be a really tough day at the office.