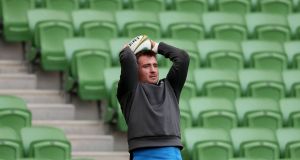 Niall Scannell: “Getting into the team is the easy part, I haven’t done anything yet. This is the chance to actually go and grab it.” Photograph: Dan Sheridan/Inpho

Of all the players in the Irish squad, none have been presented with a more unexpected opportunity, or arguably a bigger one, than Niall Scannell in today’s second Test against the Wallabies.

Barely over a fortnight ago, the 26-year-old Munsterman was not even one of the three hookers named in the squad for this three-Test series. But events have conspired to hand him his first Irish outing since the tour to America and Japan last summer.

With Irish captain Rory Best ruled out of the tour with a torn hamstring, Scannell was added to the squad. And with Sean Cronin seemingly copping the blame for that costly 68th minute scrum penalty in the first Test, Scannell – regarded as a strong scrummager – has been included to the starting line-up.

Rob Herring impressed last week with the accuracy and variety of his darts, as well as his play in the loose, and were Scannell to follow suit with a strong performance here – particularly at the set-pieces – he would elevate himself to being one of the likely lads for next year’s World Cup.

“Obviously Rory has the jersey at the moment, we all know that; he is the skipper and the rest of us are probably fighting for that second spot,” says Scannell. “Being honest, I thought I had a good summer last summer in Japan and America, but this season didn’t really break for me, I didn’t really get a flow of games.

“It has been a frustrating season for me, really, with injuries. I’ve felt I have fallen out of that hunt a small bit and I probably got on the plane fortuitously – after Rory failed his fitness test. But since I got here, I have just tried to knuckle down and get on the same wavelength as everyone in terms of the knowledge, the detail and to work physically hard. Now thankfully I have been given a chance, I just have to grab it.”

Having toured last summer, and then been called in at the start of the week’s pre-tour camp in the Carton House with an injury cloud hanging over Best, also helped. He knew there would be no room for passengers, and resolved to at least to leave Schmidt wondering if maybe he should have been selected.

“That was just my approach, obviously I got a lucky break because Rory got injured and that was unlucky for him. But I probably haven’t had many lucky breaks this season so I’ll take them when they come and grab them with two hands. Getting into the team is the easy part, I haven’t done anything yet. This is the chance to actually go and grab it.”

This season there have been knee and pectoral injuries, ruling him out of the November window, while for the most part Rhys Marshall became Munster’s first-choice hooker. Whereas last season Scannell played 26 times for Munster, starting all but four of them and was an ever-present in their run to the European Champions Cup semi-final, this season he has been restricted to just nine starts in his 18 appearances.

The semi-final against Racing was his first start since the pool opener away to Castres, and it did not go well for him, with Racing’s brilliant defensive lineout picking off his throws. But Scannell had also played seven times for Ireland last season, and had enough credit in the bank – not least when deputising for Best in the win over Italy in Rome – to keep him in Schmidt’s thinking.

Scannell was only called in for that Test debut at around four hours notice, after Best had been struck down with a tummy bug.

“It was the ultimate, getting my first cap, and seeing how proud my parents were and stuff was brilliant. The more you’re inside the environment, there’s the honour of playing for your country and that’s the main thing, but it’s such a proud, competitive, winning team that there’s pride in being here, but there’s also an onus and responsibility to push things on.

“I love that I’m here, I’m enjoying being here but at the same time there’s that sense that I have to add to this. That’s what you want, I want to be able to hang up that number ‘2’ jersey on Saturday thinking ‘I added something to this’. That’s what you’re aiming to do.”

That was the first thing I learned when I played Italy, just the speed of international rugby, it drags you

Scannell will again have plenty of family support in AAMI Park. His aunt and uncle live in Sydney, and despite his late call-up, his father and sister Kate have travelled over. This Test, he says, will be a test of character as well as ability.

“That is why they call them test matches, isn’t it? They bring you to a dark place, and that’s brilliant, I am relishing that, and you know you are going to be tested and you are going to come out of it on Saturday knowing a lot more about yourself as a person as well as a rugby player.

“That was the first thing I learned when I played Italy, just the speed of international rugby, it drags you . . . you have to do everything a bit quicker, you have to make your decisions a bit quicker, you are going to be more fatigued, but that is what I love about it. Very few club games throughout the year bring you to that place. You are really testing yourself, you make your decisions quickly, you cannot hesitate. That is what I am looking forward to most.”

A level-headed, ambitious and focused man, Scannell also understands the significance of this tour in the greater scheme of things compared to last summer.

“With no disrespect to the other teams [USA and Japan], Australia are a Tier One team and that brings a bit of a difference straight away. But last year everyone there was looking to put their hand up as well, so you’re still bringing that competitiveness. It’s a World Cup year and everyone wants to put their best foot forward, to make sure they’re staying in this mix and the only way we can do that is by performing.”

Here is your handy guide to sport on television this week 17:01
Southampton stop Everton in their tracks at St Mary’s 16:47
Inspirational Burke points the way as Dublin clear opening hurdle 16:35
A changing of the seasons as Minella Indo lines up at Wexford 15:40
Lewis Hamilton makes history in Portugal with 92nd GP win 15:45
Crossword Get access to over 6,000 interactive crosswords