Michael Cheika putting it all on the line for series decider 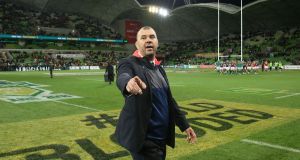 Michael Cheika: “There’s a couple of things that we can amend and improve to get us in front.” Photograph: Scott Barbour/Getty Images

Michael Cheika’s name will always have a certain resonance in Irish rugby after his demanding ways did so much to instigate Leinster’s transformation from underachievers into a European superpower.

His name, like his legacy, lives on, but it has increasingly less relevance in an Irish context, and he is the first to admit it. That Ireland have won the Grand Slam and now taken this series to a decider with last week’s first win over the Wallabies in Australia since 1979 ensures as much.

Asked if this game was more important to him because of his time with Leinster, Cheika said: “No, not because of the history with Ireland. It’s important in its own right. This is not about where I’ve lived before. This is about Australia playing the Test series against the number two team in the world.”

Mindful that the Wallabies host the back-to-back world champions New Zealand in the first round of the 2018 Rugby Championship here in Sydney, Cheika added: “And getting that job done will put us in good stead to go into a Test series against the number one in the world, which is what we’ve got to do after this, and you can’t ask for any better preparation as far as I’m concerned. This is exactly where we need to be.”

The Wallabies are the wounded ones this week, and no-one hates losing more than Cheika.

“I think there’s a very clear focus. We’re coming in off the back of a loss, a close one albeit, but still a very sharp focus on things that we can immediately improve. There’s a couple of things that we can amend and improve to get us in front when it’s a tight call but they’re big games and we want to get experience in putting ourselves in the position where we’ve got to play for these trophies and have these types of weeks where everything’s on the line. Enjoy them and really be clear on how we can get the results in this situation.”

There’s little doubt that one of the Wallabies’ main focuses this week will be to make more and better use of Israel Folau’s peerless ability in the air, as they did in the first test.

Cheika again made reference to Ireland’s use of blockers in the second test, a claim which has irritated Schmidt, but all of this is predicated on the kind of physicality the Wallabies coach demands of all his teams.

“We’ve got a few different things that we might look at, for sure. But we can counter the blocking and everything like that with better kicks. If we do that, or maybe a few different things that they’re not ready for to change up the picture, but again, everything depends on having the platform laid up front. Nothing happens without that type of physicality and that type of accuracy around the attacking ruck to be able to launch any of these things.”

Old habits die hard though. After improving their discipline in the first test, the Wallabies were back to their slightly wild ways last week in Melbourne, when conceding 15 penalties and were fortunate not to have more than one yellow card, which itself was fairly blatant.

Yet Cheika is confident they are successfully addressing this problem “because we’re really concentrating on it. And it’s not all going to happen at once. We’re working on it hard, even with our off-field stuff and getting an understanding from the referees of exactly what they’re looking for and making sure we’re relaying that correctly. Just little things. Because I think for us if we keep working on that, like all things, you practice it, it will start to turn for you.

“I think it’s funny the majority of our penalties have been for offside or in the defensive ruck and that’s not where we’re giving away the least penalties. We’ve only give away one offside penalty, through measures that we’ve taken. So we’ve just got to knock off little bits and pieces along the way and we’ll start getting consistent in that area.”

The Socceroos have been hogging the headlines and the television coverage this week in advance of their pivotal World Cup pool meeting with Denmark, prior to which Cheika was asked if he would be watching.

“I’ll be watching, 10pm kickoff, not too late, I don’t have to go to bed before midnight. I’d say they (the Wallabies players) will be up watching it, I couldn’t imagine they wouldn’t be. I don’t put the curfew on that, that they have to be in bed by 11pm. It’s a big game, they were unlucky in the last game, bloody VAR,” he said, with a cheery laugh.

1 Pete Sampras: The forgotten great with the best serve in the business
2 Super Rugby AU offers glimpse of rugby’s future if law changes are adopted
3 Cam Newton broke the mould: Can his flame be rekindled at the Patriots?
4 John O’Sullivan: IRFU must recognise vital role of clubs in rugby's return
5 Tuilagi case shows England’s home-based clause is out of date
Real news has value SUBSCRIBE