Substantial pressure on Jones and England to keep the series alive 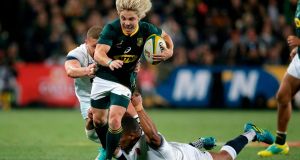 England enter Saturday’s pivotal second Test against South Africa with orders to rise above recent results by playing with courage.

Eddie Jones’ men are seeking to end their five-match losing run when their series against the Springboks continues at Free State Stadium, knowing that another defeat will render the tour a failure. A 42-39 collapse at Ellis Park has turned the trip to Bloemfontein into a must-win encounter as pressure builds on Jones’ England.

“If it’s there to play, we will. We want to be aggressive, we want to play with the ball in hand. We want to make attack a real focal point. If it’s on then we expect it to be played. We’ve got people like Owen Farrell and George Ford, guys who see the game very well.

“We’ll need to be better this time because South Africa will be better. They’ve made a couple of changes that will help their set piece, so we expect them to be stronger there.

“It was a good comeback from them in Johannesburg so they’ll be confident and better for the extra week they’ve had.”

Free State Stadium was the home ground for South Africa boss Rassie Erasmus, who played for Free State for seven years before beginning his coaching career, while the 100th cap being won by Tendai ‘Beast’ Mtawarira serves as further motivation for another Springbok win.

“There will be a number of reasons why they are hungry to win this game,” Hartley said. “It’s the ‘Beast’s’ 100th game and Rassie’s first game at his old ground. They don’t lack incentives, but neither do we.”

South Africa’s main dangerman is electric Sale scrum-half Faf de Klerk and England know the importance of denying him the type of platform that gave him the freedom of Ellis Park a week ago.

“Stopping De Klerk starts with stopping any momentum they get. We have to make sure that our pack stops their momentum,” Hatley said.

“If he doesn’t have momentum then it’s very hard for him to generate the speed and tempo that he did for the middle part of the first Test. It’s not just about stopping Faf, it’s about stopping the people around him as well.”

South Africa captain Siya Kolisi expects an improved performance from his side and urged his team-mates to keep their intensity high from the first minute.

The Springboks trailed England 24-3 after a bewildering opening 17 minutes in the first Test at Ellis Park as the tourists cut through their defence at will. But they rallied to secure a narrow 42-39 victory and Kolisi, the first black captain of the Boks, expects his team to be far more polished from the first minute this weekend.

“It’s about intensity and work rate, and it’s about maintaining that for 80 minutes,” said Kolisi.

“We have had another week together as a team and the guys who played against Wales [in Washington on June 2nd] are now over the travel.

“We want to start off on a high and keep up the intensity. There can be no excuses, that is our team motto.”

Kolisi says the Bok bench will be crucial in making sure they can keep that intensity.

“When the bench comes on, we want to see that we keep the tempo up, and I know we that there are players capable of that,” he said.

England have made two changes to their starting side, bringing in lock Joe Launchbury and New Zealand-born flank Brad Shields, both of who should provide more muscle in the pack.

“We know they have a couple of new players who will want to prove themselves. It will really come down to who wants it the most and who makes the least mistakes,” Kolisi said.

“I know him [Shields] from Super Rugby, he is very good in the outside channel and he can also work towards the ball, stealing, which is something we wanted to work on from last week, securing our own ball.

“He is going to want to prove himself in his first start to make sure he stays there, but we will just have to control what we can and make sure we are always alert in what we want to do.”

The Boks have included Kolisi’s Stormers teammate Pieter-Steph du Toit on the flank, bringing both muscle and an extra lineout option.

“He is very calm, he doesn;t panic and with the lineouts he presents another option,” Kolisi said. “We know what he has been doing with his strong ball carries and we will be looking for that from him to build momentum.”

The third and final test will be played in Cape Town on June 23rd.

1 Saracens to accept second 35-point deduction and effective relegation
2 Welcome to Iten in Kenya – home of champions and cheats
3 How do Klopp’s Liverpool measure up against greats of past?
4 James Ryan returns to the Leinster fold for Benetton clash
5 Jim Gavin to be conferred with Freedom of Dublin City on Saturday
Real news has value SUBSCRIBE