Ireland will need their best for last against Australia 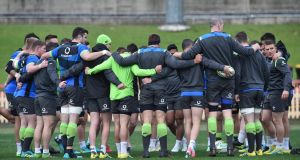 The Ireland players speak in a huddle during training on Thursday. Photograph: Getty Images

Opportunity knocks for some individuals in particular in Sydney tomorrow, but most of all collectively. For Ireland to cap off this mother of all seasons with a come-from-behind series win in Australia, thereby bridging a 39-gap since the boys of 1979, in some respects it would be almost as much of a landmark achievement as winning the Grand Slam.

Of course, a third Slam in history is the ultimate prize in between World Cups, but you always sense the southern hemisphere superpowers are a little sniffy about the annual European showpiece.

A victory here would not only categorically cement Ireland’s status as the second best side in the world, but command global respect as well as imbuing this squad of high achievers with even further belief before next year’s World Cup.

In truth, confidence in Ireland’s ability to achieve the feat has perhaps ebbed slightly with a selection which is more re-jigged than anticipated, what with five changes in personnel and four positional. To a large extent, Joe Schmidt’s hand was forced by the injuries to Iain Henderson (knee), Dan Leavy (sternum), Garry Ringrose (foot) and Andrew Conway (hip).

Leavy’s loss could be the most acute, given the physicality and huge numbers he brings on both sides of the ball. Indeed, it’s no surprise that his body eventually gave way, although ironically his sternum injury was the result of falling on the ball rather than one of the many collisions which characterise his high energy game.

The net effect is a slightly imbalanced looking backrow, with CJ Stander shifting to blindside and Peter O’Mahony, captaining the side for a sixth time in his 50th Irish international, will wear the number seven jersey for the first time.

Ireland have lost Ringrose’s footwork, ability to break on the outside and good reads in defence, although that said, the Bundee Aki-Robbie Henshaw partnership is well versed, and in returning to outside centre Henshaw is unlikely to repeat the blips of the first test.

Accordingly, Schmidt has no doubt Ireland will have to produce their best performance of the series.

“Absolutely. That would be an unequivocal yes,” the Ireland coach said definitively and envisages a reprise of the Wallabies’ performance in the first test which “had a shock value to it” with potent kicking and running games.

In this regard, the third test offers a huge opportunity for Sean Cronin and Jack Conan in particular, when one thinks of how Rob Herring and Niall Scannell have performed here, and the litany of backrowers who could be available next season when Sean O’Brien, Josh van der Flier and Rhys Ruddock among others come back into the mix.

“Jack Conan gets his first start of the tour. He’s going to be really excited about getting out there and doing his very best and we’re excited about seeing how he gets on. Sean Cronin with that dynamic ability to close space, to get into space quickly, we’re excited to see that,” said Schmidt, who nonetheless has thrown the gauntlet down to Cronin come set-piece time, and especially in the scrums.

However, it will be a surprise if the Irish scrum again permits the Wallabies to inflict the same kind of damage they wrought in the first test. For all the threat Pocock and co bring to the breakdown, presuming Ireland carry as they did last week and clear out as efficiently as they normally do, one can again anticipate them having large tracts of possession and territory.

Ireland may well need to score in the region of 26 points again, and one of these days they’re going to translate their clean breaks and hard work into tries. But at least their slick set moves and well rehearsed work off the ball through the phases is generating those chances.

In this post-O’Driscoll, post-O’Connell era, the world-class elements have been transferred to half-back and elsewhere, and this Ireland team also have the men to drive the performance in Conor Murray and Johnny sexton who are starting their 49th test together.

Out wide, conceivably, any Australians who’ve heard us hail the best amalgam of Irish pace and footwork since the emergence of Luke Fitzgerald, might be wondering what all the fuss about Jordan Larmour is about. Maybe they’re about to find out.

And as much as anything, with the tickets exchanging hands for four times their face value, Ireland will draw strength at key times from the presence of a Green Army which will go some way to neutralising Australia’s home advantage.