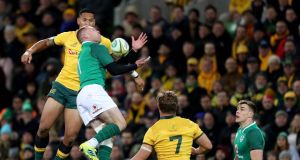 Australia are considering lodging a complaint with match officials against what they consider Ireland’s illegal blocking tactics on fullback Israel Folau, according to Wallabies attack coach Stephen Larkham.

Ireland edged the second test 26-21 in Melbourne on Saturday to set up a decider in the three-match series but their treatment of Folau and slowing down of Australia’s ball at the breakdown have infuriated the hosts.

“But for us I think it’s two-fold. It’s one, getting the kicks accurate so that our chasers aren’t running between two or three guys, and then to bring it to the referees’ attention just to make sure that everything is legal there.

“I think Ireland did a fantastic job at slowing the ball down and again you’ve got to look at their tactics and say: ’is it something we need to bring up with the referee?’”

The 44-year-old admitted Australia’s kicking was particularly poor in Melbourne but was confident the side would improve for the series decider in Sydney on Saturday.

“There’s putting the ball out, there’s execution and accuracy of our kicks, and then looking at our chase line and how we can fix that,” he said.

Meanwhile, New South Wales Waratahs scrumhalf Jake Gordon has joined the squad in place of Will Genia, who will miss six weeks with a broken arm.

“He’s an integral part of the team, there’s no doubt about that, he’s part of our strategy group and he’s had a very good combination there with the forward pack and the backline,” Larkham said of Genia before Gordon was included in the side.

“So he’s definitely a big loss but in saying that, we’ve got really good experience in Nick Phipps, Joe Powell’s been around the team now for the last 12 months and we’ll have to bring someone else into the team now.”