Danny Cipriani starts for England for first time in 10 years 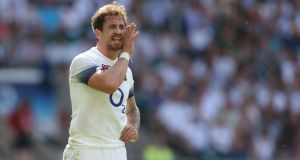 Outhalf Danny Cipriani will make his first start for England in almost a decade and there is a return for flanker Chris Robshaw as coach Eddie Jones shuffled his team for the third and final test against South Africa on Saturday.

Cipriani replaced George Ford in the number 10 jersey as one of four changes to the starting line-up announced by Jones on Thursday as England seek to end a run of five straight test defeats and grab a consolation victory over South Africa.

Cipriani’s last start came in a 42-6 loss to the Springboks at Twickenham in 2008, though he has won 15 caps in all, his most recent off the bench in the 23-12 defeat in Bloemfontein last weekend after an absence of three years from the team.

“We are expecting a wet and windy old day at Newlands and have elected to play Danny Cipriani ahead of George Ford to give us a left-foot kicking option,” Jones said.

“We will need to jump out of the blocks quickly again and make sure we maintain that pressure and make good decisions.”

Robshaw, previously a stalwart under Jones, is recalled to the blindside flank position after New Zealand-born Brad Shields dropped out of the squad due to illness.

Prop Joe Marler comes into the side in place of Mako Vunipola, who has returned home for family reasons, while Nathan Hughes takes over at number eight from Billy Vunipola, who refractured his arm in last weekend’s loss in Bloemfontein.

Uncapped lock Jonny Hill has been included among the replacements.

“We are up for the battle and are going to rip in on Saturday. We want another committed performance where it will be crucial to maintain our composure when the heat is on.

“I’ve been really impressed with the fortitude of the squad under Owen Farrell, who is a young captain, and with a number of young players who have really stuck to the task.”