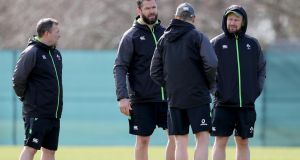 Joe Schmidt’s Ireland coaching team has signed contract extensions that will see them continue in their respective roles until the summer of 2020 with the exception of scrum coach Greg Feek, who will step down after next year’s Rugby World Cup in Japan.

Irish head coach Schmidt signed a new deal in October 2016 that culminates after the World Cup so the IRFU is keen to keep continuity in terms of the backroom team if the New Zealander decides to step away from his current position after the global tournament.

Farrell replaced Les Kiss as Ireland defence coach after the 2016 Six Nations Championship while Murphy graduated to the national coaching cadre in 2014 having previously worked with Leinster in the same capacity.

Feek joined the national coaching group on a full-time basis in 2014, again from Leinster after initially working with he national team on a consultancy basis. Due to a change in personal circumstances the New Zealander will take up a position with Japanese club side Ricoh in the coming weeks but will continue in his role with the Ireland national team through to the completion of the Rugby World Cup in Japan

David Nucifora, IRFU Performance Director, commented, “We have a world class coaching group that has driven and sustained high levels of performance on the international stage. They also support the work of the provinces with their technical expertise and play an important role in the development of young players on the pathway to international honours.”

The Ireland team to play Australia in a three test series next month will be announced in the week of the Pro14 final (Saturday, May, 26th at the Aviva stadium) and is likely to be about 32 or 33 strong.