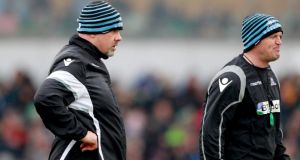 This is unless the province can strike a deal with Scotland to get McFarland in place ahead of the 2018-19 season.

McFarland is currently working as Scotland’s forwards coach, and speaking to the BBC Townsend confirmed he is set to go on this summer’s tour of the Americas.

Speaking at the announcement of his squad for this summer’s tour, former Glasgow Warriors boss Towensend said: “He [McFarland]is still working with us for the next nine months and he’ll be on tour.

“Carl Hogg’s joined us for our coaching meetings and him and Dan will share responsibilities on this tour. We see that working well, but we need to look ahead and see who will replace Dan when he does go to Ulster.

“The plan is nine months, which is January 21st before the Six Nations and we have to have someone in before then.”

Should Ulster fail to strike a deal to bring McFarland to Ravenhill this summer, it would be another blow in what has been a difficult season for the province.

McFarland’s impending departure is also damagnig for Scotland, according to Townsend: “It’s disappointing. It always is when someone you work closely with moves away, but it’s obviously an opportunity for Dan to become a head coach and we’ll have to adapt and move on.”