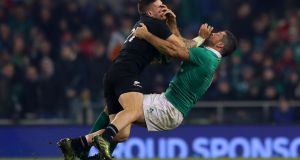 The IRFU have set record ticket prices for Ireland’s games against the All Blacks at the Aviva stadium on November 17th. A premium ticket to see the top two seeds in world rugby is €137 with Category 1 and 2 seats both exceeding the €100 mark for the first time.

“New Zealand is one of the caché matches in world rugby and everyone would want to see the match,” explained IRFU chief executive Philip Browne on The Irish Times Inside Business podcast in January.

The most expensive stand ticket during the Six Nations was €90, when Wales came to Dublin, with the union charging €97 in November 2016 for a Category 1 seat as New Zealand exacted a gruesome revenge for defeat at Soldier Field in Chicago.

Restricting viewing seats range from €29.50 to €57. Again, these are incremental increases. Schoolboy/girl tickets to see the All Blacks remain at €15. There is a parent and child deal for Category 3 tickets for €97 (€82 plus €15).

Hospitality packages for the game are €750 per person.

The IRFU have dropped prices for the other November internationals with premium seats for Argentina at €97 while the stand ranges from €27 to €77. Tickets for the USA tickets on November 24th start at €5 for schoolboy/girls up to €57 for the premium section.

A stand ticket for the All-Ireland final remains at €80 with the GAA last increasing their prices from €70 in 2011.

The most expensive ticket for England versus New Zealand at Twickenham on November 10th is €220. The RFU claim they could have sold out the 82,000 capacity 20 times over.

The IRFU are reportedly in advanced talks for a return to Soldier Field to face Italy outside the international window. On November 3rd New Zealand begin their world tour against Japan at the Ajinomoto Stadium in Chofu while England have secured a Twickenham fixture against South Africa with Scotland playing Wales in Cardiff.