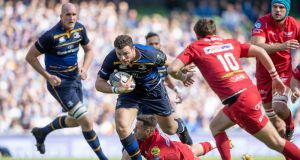 It will go down as the luckiest serious injury of the season. Lucky in that the bone didn’t crack when it could have, and lucky that the tendon didn’t rupture when it should have.

Robbie Henshaw’s try against Italy took him out of Ireland’s Grand Slam sweep. It’s difficult to see any good fortune there, but rugby careers have crashed and burned on less.

Henshaw threw himself forward to score with Italy centre Tommaso Benvenuti on his back. Both bodies hit the turf at the same time, with Henshaw awkwardly landing with the ball underneath and his shoulder popping out.

The timing of the injury in early February meant the Ireland centre probably would not have enough time to recover before the end of the season. But here he is looking hungry for a final bite of glory.

Possible winners’ medals in Europe and the Pro14 may not atone for missing the climax of Ireland’s unbeaten run to Twickenham. But Henshaw knows there is a streak of serendipity at play which has delivered another opportunity for him,when in February he saw none.

“Post-surgery I was kind of straight into the club after two days. If you get a long-term injury, usually you keep your head down, you get into your shell and you stay away from the place for a couple of weeks,” he says.

“I was straight back in and keen to do work on it straight away. I was pretty much pain-free a couple of days afterwards and got out of the sling as quickly as I could, and then thankfully didn’t have any setbacks and hit all my markers, so we could take that aggressive approach.”

Initially, his thoughts – and the doctor’s prognosis – looked at the end of May or early June for his return to play. In his head he was quietly hoping to get back for the summer tour and the three Test matches against Australia.

“It was a full reconstruction but it was through keyhole so it wasn’t an open incision,” he explains. “I had eight anchors put into the labrum [shoulder joint] so it was a reconstruction as far as they go.

“But when the shoulder dislocated my bone socket joint wasn’t harmed, so the bone itself was pretty intact and, seemingly, if that’s damaged that sets you back a lot. My bicep tendon wasn’t ruptured so that was a bonus as well.

“You can’t second guess,” he adds. “I’m not going to hold back there. I’m going to score a try for my country.”

He concedes that to beat Racing 92 in Bilbao on Saturday would surpass his league win with Pat Lam and Connacht in the 2016 Pro12 final, when they beat Leinster. Henshaw then left Connacht to play on the east coast.

That final must also have made for uncomfortable viewing for Ireland coach Joe Schmidt, who earlier in the week picked all of Leinster’s back-three players in his touring squad for South Africa and left all of Connacht’s out.

The movement of players between provinces has become a tricky subject to talk around, with the Joey Carbery saga bubbling on. While Henshaw knew he was leaving Connacht, the defeat of Leinster did not undermine his decision to move. No doubts crept in.

“I know that playing on that day Leinster were down a couple of players and unfortunately Dev’s [Toner] dad had passed a few days before that game,” he says in defence of his current team.

“So there was a lot of things going on in the background. That could have had a big effect on the game for the lads. There were a few things happening that the Connacht side mightn’t have seen.”

Now is no time for rehashing a decision he made two years ago, one which has been a benefit to his game and has critically solidified his relationship with Garry Ringrose at outside centre.

Henshaw is satisfied with where he has arrived at the end of a long season and, more immediately, focused on what is on offer on Saturday.

“I’ve been in love with this competition since I was a kid,” he says of the European Champions Cup. “I always used to love watching it and to have a taste of it in Connacht a few years ago, you really feel the step-up and the energy it brings.

“So I think to be here in this position is a bit of a dream.”