Even without Machenaud, Racing will make formidable foes 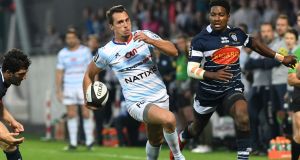 While the loss of captain, playmaker and primary goalkicker Maxime Machenaud has dominated the headlines regarding Racing 92 since they disposed of Munster in the semi-finals, in all other respects the Parisians approach Sunday’s final against Leinster in good shape.

The 29-year-old incumbent French scrumhalf suffered ruptured knee ligaments in his side’s 39-15 Top 14 win away to Bordeaux Begles last Saturday week, ironically after coming on as a second-half replacement for the 25-year-old ex-Brive scrumhalf Teddy Iribaren, who will now start the final.

That was the week after Machenaud landed five from five in the same Stade Chaban Delmas in his home city of Bordeaux when, helped by the generosity of Teddy Thomas, he scored 17 points in Racing’s 27-22 win over Munster.

It is particularly cruel for Machenaud as he was forced off with concussion at the end of the first quarter of Racing’s 2016 European Champions Cup final loss against Saracens, when Dan Carter’s departure early in the second half after aggravating a leg injury also contributed to their 21-9 defeat.

Five weeks later, in the French Championship final in Barcelona’s Camp Nou, attended by almost 100,000 supporters, Machenaud was sent off in the 19th minute for a spear tackle on Matt Giteau. Remarkably, 14-man Racing went on to win the Bouclier de Brennus by beating Toulon 29-21, with Juan Imhoff doubling up as a wing-cum-scrumhalf.

In the last two weeks, they have again shown they can win without Machenaud. Most of the frontline team from the quarter-final win away to Clermont and the semi-final against Munster pitched up again in Bordeaux, albeit Imhoff came in for Marc Andreu on the left wing and Dan Carter started at outhalf (and rolled back the years with his best performance of the season). Cedate Gomes Sa, Donnacha Ryan and Yannick Nyanga were all rested, while Camille Chat, Machenaud and Patrick Lambie were on the bench.

Significantly, in addition to Machenaud, the remainder of the starting XV which played against Munster were rested for last Saturday’s 26th and last regular season match at home to Agen. The one exception was Andreu, who was on the bench, and, tellingly, after scoring a brace of tries against Bordeaux, Imhoff scored another two extraordinary tries last weekend as captain. It seems conceivable therefore that the prolific 6ft Puma will thus start ahead of the 5ft 7in Andreu, which would also add to Racing’s aerial game.

The other issue is at tighthead, where Racing will choose between Ben Tameifuna or Cedate Gomes Sa. Against Munster, mindful of the forecast hot weather, they omitted the 145kg Tameifuna, but with the forecast rain and temperatures of around 12 or 13 degrees in Bilbao, it could be that his powerful scrummaging will be preferred to the greater mobility of Gomes Sa.

Racing’s experienced hooker Dimitri Szarzewski was another casualty of that win in Bordeaux a fortnight ago when suffering a torn bicep, but his absence has been offset by the maturing-form Camille Chat this season. Still only 22, Chat broke into both the Racing and French sides two seasons ago only to be omitted from the European Cup final defeat to Saracens. Now he’s a young man on a mission.

In any event, their frontline team for this Saturday’s final were effectively rested every bit as much as Leinster’s were last weekend. Not that this prevented them from registering six converted tries in a 42-13 win which sealed their place in the top two of the Top 14 final table on 80 points, just one point behind Montpellier.

Racing have a tendency to play in bursts, and very often in the first quarter, as they showed against Munster

Racing conceded the least tries, 45 in 26 games, of any team in the Top 14. Their defensive system – with its fast line speed, superb tackle technique (which invariably averages more than 90 per cent effectiveness), shape and ability to identify the right breakdown to contest through the likes of Yannick Nyanga, Leone Nakarawa, Eddy Ben Arous, Henry Chavancy et al – is very much considered as Ronan O’Gara’s legacy.

Racing also possess, as Johann van Graan readily attests, the best defensive lineout in Europe and some real X-factor and match-winners in the likes of Thomas, Imhoff, Nakarawa and Virimi Vakatawa, relishing in his favoured position of outside centre.

Racing have a tendency to play in bursts, and very often in the first quarter, as they showed against Munster. After 27 minutes, Thomas and his team had already scored three tries and led 24-3. Racing have scored a third of their points in the Champions Cup during the first 20 minutes of games (62 out of 183 total). In the same time, they have conceded only 23 points in eight games. They also have momentum, having won 16 of their last 19 matches since December in both competitions.

Akin to Leinster last week in the Pro14, Racing have thus bypassed le barrage and earned a semi-final two weeks hence against either Toulouse or Castres. Win that and they will therefore have reached both the European Champions Cup final and French Championship in the same season for the second time in three years.

That is quite remarkable, as one can effectively put last season, when Racing finished sixth in the Top 14, down to the curse of the bouclier – witness Clermont this season, who finished ninth. Three seasons ago, as defending champions, Stade Français finished 12th. Only Toulon in the last five seasons as defending champions have managed a top-five finish when topping the table four seasons ago before losing in the semi-finals.

Racing may have a multi-millionaire backer in Jacky Lorenzetti, but, encouraged by new rules restricting the number of non-French players in match-days squads to 14 this season and rising to 17 in three years’ time, Racing’s modus operandi is to combine young French talent with a mixture of high- and lower-profile imports.

The team that played Munster contained a dozen French players, along with one Irish man, Donnacha Ryan, a Fijian, lock Leone Nakarawa, and the South African outhalf Lambie. There were another four Frenchmen on the bench.

For all Lorenzetti’s ambition, he understands the virtues of building a culture and maintaining a steady ship. Given time, the Laurent Travers and Laurent Labit coaching double act have provided success wherever they have gone. In six seasons overseeing little Montauban, they won promotion in year three from the Pro D2 and by dint of a seventh-place finish in the Top 14 in year five, qualified for the Heineken Cup in their sixth and final season there, 2008-09, when coming within a 79th-minute penalty by the aforementioned O’Gara of beating Munster at Thomond Park.

The pair then went to Castres, leading them to their last Top 14 title with victory over Toulon in the 2012-13 final, before Lorenzetti lured them to Paris. In their third season with the Parisians, Racing won their sixth French Championship crown, and first since 1990, and now stand within three games of an historic double.

No one really knows who’s boss, other than his first name is Laurent. They seem to operate as a well-balanced double act. Travers, who like Leo Cullen is seeking to become the first European Cup winner as player and coach, having been hooker in Brive’s inaugural win in 1997, is the more forward-orientated coach. He brings the passion, so much so that after several touchline bans he now sits in the stands with the video analysts.

Labit, a fullback on the Castres team that won the French Championship in 1992-93, is a shrewd coach who, as the more dispassionate part of the double act, patrols the sidelines.

They have had their contracts extended until 2022, but this includes a clause which permits them to take on a national job, most probably with Les Bleus. Hence, they are likely to remain in situ until after the next World Cup, but maybe not for much longer than that.