Opportunity knocks for Hanrahan – and Munster 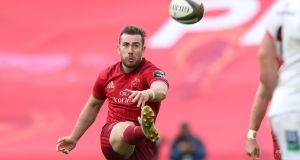 JJ Hanrahan: it’s the most significant chance he’s been afforded at outhalf in his Munster career to date. Photograph: Billy Stickland/Inpho

If Munster are to ease their latest dose of European blues, much of the motivation is going to have to come from within.

In stark contrast to the 27,000 capacity crowd which played such a key role in their Champions Cup quarter-final win over Toulon, as of yesterday only 8,700 tickets had been sold for this quarter-final.

With the game only having been confirmed a week ago, it also clashes with a number of other events, not least the belated arrival of summer on the May bank holiday weekend.

This is also a traditional family weekend in Limerick, with the annual Riverfest set to draw over 85,000 to the banks of the Shannon for various water-based activities, celebrations of food and fashion, outdoor and indoor concerts, and the Bon Secours Hospital Great Limerick Run.

Up against all of that, a first Guinness Pro14 ‘semi-final play-off’ is a hard sell, especially, one imagines, in the wake of another deflating European Champions Cup semi-final defeat in Bordeaux a fortnight ago. Conceivably, as many members of the Red Army will have made their way to the Stade Chaban Delmas as will be in Thomond Park.

Having given most of their front-liners a respite last week, Johann van Graan has made a dozen changes from the starting line-up from the creditable 24-all draw at home to Ulster but the most interesting is one of the three players retained. In addition to centre Sammy Arnold and loose-head James Cronin, man of the match last week, JJ Hanrahan, holds onto the outhalf position ahead of Ian Keatley.

So opportunity finally knocks for the gifted 24-year-old Kerryman in his preferred position. Although this is his 83rd game for his native province, it’s the most significant chance he’s been afforded at outhalf in his Munster career.

Allowing for concerns about his game management, which he freely acknowledges, Hanrahan has also been a victim of his own versatility. Of his previous 82 games for Munster, 22 have been at outhalf, seven at inside centre and eight at full-back, with 45 off the bench. He has only started one European game for Munster, at inside centre against Clermont in December 2014, and has never previously started a knock-out game in the Pro14.

Hanrahan, therefore, is in effect one of four changes to the starting line-up from the Racing defeat. Simon Zebo, curiously confined to a second-half appearance in Bordeaux, returns at full-back on what will be his final appearance at Thomond Park before relocating to Racing.

Andrew Conway thus shifts to the wing and Keith Earls moves across to the left-wing. In addition to Cronin being named ahead of David Kilcoyne, Rhys Marshall (another surprisingly relegated to the bench against Racing) is restored.

Mike Sherry and Ciaran Parker, the 22-year-old, Stockport-born, Irish qualified prop, are named on the bench in the absence of the injured Niall Scannell (AC joint) and John Ryan (back), while Darren Sweetnam is picked ahead of their leading Pro14 try scorer this season, Alex Wootton.

With Duncan Williams observing return to play protocols this week, James Hart joins Keatley on the bench, which also features Gerbrandt Grobler and Robin Copeland, both of whom will also be making their Thomond Park farewells.

The game has also come too soon for Jaco Taute, who returned to training this week after rehabbing a long-term knee injury sustained in September.

With the long-term pacesetters losing their form lately, as Connacht showed three seasons ago and Scarlets especially last season, momentum is becoming as important as home advantage in the knock-out stages, and Edinburgh are the form team in the competition.

Last week’s fine win over Glasgow to seal the 1972 Cup at Murrayfield was their eighth in their last nine Pro14 games. It’s funny how teams are carved in the image of their head coach, and under Richard Cockerill, Edinburgh have become a confrontational, direct, low frills side, who seek to win the collisions and generate quick ball before eventually going wide. Sam Hidalgo-Klyne also gives them a deadly kicking game from the base.

Their brand of rugby is suited to the knock-out stages. They have won four of the six one-score games they’ve been involved in. It was revealing to hear Cockerill explain why they were going to the corner in the third quarter last week despite being seven points ahead during the game.

“We’re trying to develop the team. We’re trying to have the mentality to attack teams. We’re going to Thomond Park next week and we’ve got to be brave, and it’s a good chance to practice.”

Their team has been strengthened too by the return of the talented fullback Blair Kinghorn, a late call-off last week due to illness. Centre Chris Dean returns from injury, while outside him Mark Bennett is recalled.

“It’s going to be a big day for us and we have earned the right to be there – the league table doesn’t lie,” said Cockerill, noting that “there is a bit of pressure” on Munster after their Euro exit.

Edinburgh are sick of losing at this venue, they have only won once here since 2006, while Munster’s only defeat at home in any tournament since February 2017 was to Leinster at Thomond Park on St Stephen’s Day.

While the Thomond Park factor will seemingly be more negligible than usual, Munster have the physicality to meet this Edinburgh challenge head on across the gain line, and the greater variety in attack to get them over the line.