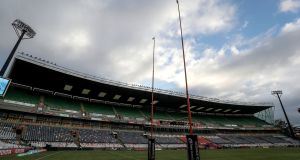 The Toyota Stadium in Bloemfontein ahead of the Cheetahs’ Pro14 clash with Munster. Photograph: Inpho

The Pro14 is poised for further expansion with three more South African sides set to join the competition by the start of the 2020/21 season.

Celtic rugby’s main tournament grew from 12 teams to 14 for the start of this campaign, South African-based outfits Toyota Cheetahs and Southern Kings heading to the northern hemisphere.

It is understood two more South African sides will enter the Pro14 for the 2019/20 season with another jumping on board for the campaign after.

Natal Sharks are understood to be the first team likely to join the Cheetahs and Kings in taking on sides from Wales, Ireland and Scotland on a regular basis in domestic competition.

The Bulls, Lions and Stormers could all follow suit in the years to come.

South Africa’s franchises have grown increasingly disillusioned with competing in Super Rugby alongside opposition from New Zealand, Australia and Argentina.

The South African Rugby Union believe their sides are handicapped due to the different time zones in the competition and the unfair composition of the conferences.

South African rugby has seen its top players leave left, right and centre for lucrative moves to Europe in recent years and it is hoped moving teams to the Pro14 can help stop that trend.

The Bloemfontein-based Cheetahs and the Kings were the two weaker South African sides in Super Rugby, prior to their transfer to the Pro14.

And although the Cheetahs were thrashed 43-8 by the Scarlets in Saturday’s Pro14 quarter-final, they impressed in their debut European season to reach the last eight.

Pro14 bosses have been heartened by the on-field impact of the Cheetahs and Kings and believe the prospective introduction of the Sharks and further South African sides will significantly increase the quality of the competition and make it more attractive to broadcasters and investors.

Pro14 chief executive Martin Anayi has been tasked with increasing the competition’s revenue streams which he has done successfully.

Under Anayi, the Pro14’s TV income has risen from £12million to somewhere in the region of between £20m and £30m with a new broadcasting deal seeing paid-for provider Premier Sports taking over the rights for next season.

The imminent introduction of further South African sides has been factored into that three-year contract.

The introduction this season of the Cheetahs and the Kings is also believed to have brought in an extra £500,000 per team.

It is believed Super Rugby bosses have drawn up plans for expansion of their own as a contingency plan should the South African franchises head to Europe.

Last week a document published by SANZAAR - the body which operates Super Rugby - was leaked to the Sydney Morning Herald touting the addition of an American conference to the competition.

1 Bryson DeChambeau trainer insists muscle gain is not down to steroids
2 Paul Stirling’s heart over head decision to play on for Ireland bears fruit
3 Leo Cullen says rotation will be key as Leinster look to keep on winning
4 Harding Park, named after a lousy US president who never stepped foot on it
5 Sporting Cathedrals: Le Stadium - European fortress of the mighty Toulouse
Real news has value SUBSCRIBE

‘Slim to no chance’ of Nick Kyrgios playing in French Open due to Covid-19 fears 09:27
Bryson DeChambeau trainer insists muscle gain is not down to steroids 09:05
Golf Majors return with US PGA, Man United progress in Europe 07:39
Sporting Cathedrals: Le Stadium - European fortress of the mighty Toulouse 06:00
Joanne O’Riordan: Why doesn’t streaming bonanza extend to women’s sport? 06:00
Here is your handy guide to sport on television this week