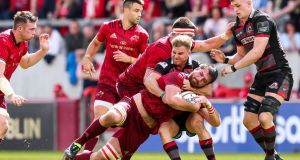 Munster’s Jean Kleyn is tackled by Edinburgh’s Jaco van der Walt during the semi-final qualifier at Thomond Park. Kleyn is an injury concern for the semi-final against Leinster. Photograph: Billy Stickland/Inpho

Now that this semi-final play-off is out of the way, presumably another weekend’s break and the prospect of playing Leinster at the RDS in the Guinness Pro12 semi-finals proper a fortnight hence will rock Munster’s boat.

This may be truer still if Leinster win the European Champions Cup final against Racing 92 in Bilbao on Saturday, which will be a difficult watch down in these parts.

So it was seven seasons ago when Munster denied Leinster the double a week after they had completed their famous comeback win over Northampton in the Euro finale by winning the then Pro12 final.

There have been six semi-final defeats (four in Europe) as well as two final defeats (both in the Pro12) in Munster’s trophy drought since then, and a Pro14 success would imbue a young squad and coaching ticket with significant belief and momentum.

What’s more, of course, their forthcoming rendezvous is in the RDS as opposed to Thomond Park. Peter O’Mahony, was no doubt mindful of all that as well as Saturday’s level of performance when discussing the prize still at stake this season.

“It would mean a lot,” he said, in reference to winning a trophy, before quickly adding: “But we’ve got to go and play. There was some very good stuff today. But then there is stuff, if we’re going to go and compete with the best teams around, we have to improve upon. And we have to understand that. It would mean a huge amount to win silverware, it means a huge amount to any team considering the effort you put in every year. But we have to understand we need to improve in certain areas.

“When you talk about Leinster, it’s across the board. They’re playing so well at the moment. You start with your set-piece. It has got to be functioning, it has to be offering you a platform. The breakdown stuff, across the board, you have to up your game by about 20 per cent when you’re playing against teams like that. You saw today with Edinburgh how good they were. We really needed to up our game at times. Sometimes we did but sometimes we struggled. So there are a lot of areas.”

Munster’s only defeat at home since February last year was to Leinster last December, when they stormed their Thomond Park fortress to win 34-24.

“We know the challenge that lies ahead,” acknowledged Johann van Graan after this win. “We were down 27-5 at Thomond Park on December 26th and came back. There were one or two big moments in that game so will have a look at that. You can’t deny the fact that we are going to Dublin to play the best team in Europe.”

That was a description liberally used around Thomond Park after bidding a seasonal farewell to the ground and it is for this reason that, despite their semi-final defeat to Racing, van Graan made Leinster favourites next Saturday.

“Yeah, I would do so. I’ve only coached against them once, here in Thomond Park. There’s no weaknesses in their team. I think there’s 19 of their guys featured in the Grand Slam. They’ve got a quality coaching set-up and they’ve got a good academy and they perform well on big days.

“They’ve lost a few in the last few weeks but on big days they do perform. Good luck to them in the Champions Cup and like I said, we’ll do our preparation and are looking forward to the game in two weeks’ time.”

Looking ahead to that Leinster-Munster semi-final, the Edinburgh head coach Richard Cockerill ventured: “The way they [Munster] play is to control teams and territory. With respect to our guys, Leinster have probably got a little bit more firepower than we have.

“It will be really interesting. Munster will have to be very accurate to execute a game plan like that and control a team like Leinster. Because Leinster have got more threat and a bit more firepower across the team.”

Vana Graan is also hopeful the squad will be strengthened by the return of some of their injured players come the semi-final.

Jean Kleyn is a concern.

“Yeah, it’s obviously a knock. I can’t really say at this stage. He struggled through the second half. We’ll assess him and hopefully have more clarity on Tuesday.”