Lansdowne look to have the final edge over Cork Con

For some it's a stepping stone to pro rugby, for others it’s an overdue reward for a punishing year 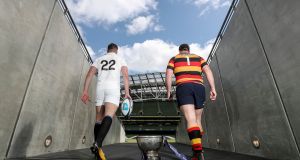 For some, the All-Ireland League final represents a stepping stone into the professional ranks – Joey Carbery being the best example in recent times. For others it’s a long overdue reward after a punishing amateur season.

“We talk about player development all the time,” says Lansdowne coach Mike Ruddock, “Tadhg Beirne would have played in the last final we reached.”

Lansdowne has long provided a roundabout route for players not give clean passage from the Leinster academy into professional ranks.

“Absolutely. Our players see Tadhg doing what he is doing for Scarlets and it gives them belief to go on and do it themselves. And there are players not picked up by the academy system, like Craig Ronaldson and Matt Healy, who have since been contracted by Connacht after performing well for Lansdowne. Clive Ross went up to Ulster, Tom Farrell went to Bedford and now he is back playing well for Connacht. It’s a good showcase for players from Lansdowne and Con.”

It’s also the pinnacle of some amateur careers. A few players remain, despite the game’s increasingly unforgiving nature, who still just want to play rugby.

“Scott Deasy would be one of those,” said Ruddock. “He’s got a Masters under his belt since leaving pro rugby and he’s adapted to a management role with Accenture. He’s quite happy with the club game but a lot of the youngsters see this as an opportunity to get into pro rugby especially after putting in some much effort.”

Deasy is a former Cork Con and Munster outhalf.

“There’s only a handful of players I played with who are still there,” he remembered this week. “My generation would have kind of been Pete, Zebo, Archer, Billy, Duncan and then Sherry, Murray and Kilcoyne would have been in the Limerick contingent. I have a young family now and I’m working away, so I’ve probably a better balance in my life. I don’t really get too much time to think about rugby. I just go out and play and enjoy it.”

Several others on view were seriously talented schoolboys.

“I think the club game is massively important to Irish rugby,” added Deasy. “It’s a long old slog in terms of we started last July and it’s only in May when the silverware is on the line, so it’s great to be here now and in contention against a team like Con, who have been here year in, year out it seems to be for the last three or four years. We’ll see what we can do on Sunday.”

Last month Lansdowne gathered silverware at the expense of Con winning a sixth consecutive Bateman Cup. More of the same is expected but the Cork men are not going to give up both trophies without bitter resistance.

“We’re delighted to be back in the final again,” said Con captain Niall Kenneally. “We will be doing everything we can now to finish the season on a high. It was disappointing to lose the Bateman Cup; look we had as very good run in that competition and I suppose it had to come to an end at some stage, we went out, performed okay, but okay is not really good enough in finals, especially against strong sides like Lansdowne, we will make a few little adjustments from that game and hopefully we will come back stronger.”

Adult tickets for IRFU HQ are only €10 while under-18s get in for free.