No complaint from Racing about alleged abuse directed at Simon Zebo 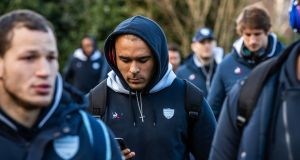 European Professional Club Rugby have not received a formal complaint from Racing 92, despite a tweet by Ireland international Simon Zebo suggesting verbal abuse was directed at him during Ulster’s 26-22 victory in Belfast on Saturday.

“EPCR has not received a formal complaint from Racing 92 regarding any alleged case of verbal abuse of one of the club’s players during yesterday’s Heineken Champions Cup, Pool 4 match at the Kingspan Stadium,” said a spokesman for the tournament. “EPCR is in contact with both Ulster Rugby and Racing 92, and will be making no further comment at this point.”

After the game Zebo, 28, tweeted: “A tough place to play but great effort from the boys, two important points on the road. Also I hope my ears deceived me with some comments directed my way from the crowd #NotOn Django wins in the end.”

The 35 times capped Ireland international, who left Munster for the Paris club last summer, has made no further comment on social media since Saturday night. The Racing 92 spokesperson was unavailable to comment but Ulster did release a short statement to The Irish Times: “Ulster Rugby condemns all forms of abuse and will work with the relevant parties to robustly investigate any complaints received.”

Munster cruise past Ospreys on a dead rubber day at Thomond 15:47
Real Steel sees off stablemate Footpad at Thurles 15:36
14-man Saracens on the brink of last-eight after edging Racing 92 15:50
Class is permanent for Lee Westwood as he claims Abu Dhabi title 13:43
Saracens accept Premiership relegation and issue apology 11:05
Here is your handy guide to sport on television this week