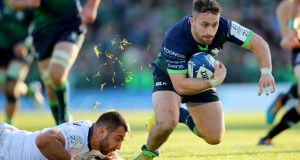 Caolin Blade cuts through the Montpellier cover to score a try for Connacht during the Challenge Cup clash at the Sportsground. Photograph: James Crombie/Inpho

Toulouse are one of the richest entities in world rugby.

The one blessing for Connacht’s money-crunchers this week is that the laundry bill will be lighter than usual this month. Connacht have a staggering 16 players out with injury just now.

Andy Friend will spend some of next week on the phone with the IRFU, discussing further cover for his thinning squad as he tries to cobble a team together on the hoof for next Saturday’s visit to the home of Toulouse. Another mission impossible awaits. Still, thriving in adversity has become part of the Connacht scene.

Friend is a glass-half-full man by nature but the performance he coaxed out of his side in the unseasonable November sunshine against Montpellier was of a different order.

Undermanned, under-strength and coming off a battering against Leinster, Connacht marked their return to Champions Cup rugby with a 23-20 win. It’s the honesty of effort as much as the results that brought the 6,229 sell-out crowd to the Sportsground.

Afterwards, Friend’s voice sounded strained as he tried to explain how it is that Connacht teams manage to shrug off economic disadvantage through dauntless collective will.

“It is probably the west of Ireland, isn’t it? You look around here; we’ve got functional facilities, without a doubt. They are not flash. But they are functional. So it is not what they look like, it is what you build within it.

“And from the moment I walked in I could see the ambition and belief that’s here. And you could see it among all people in Connacht. They are probably not meant to be doing what they do but they do it because they have got massive belief. And as a squad, that’s what we’ve got. So it makes days like today pretty special.”

As Friend spoke, a big group of kids had gathered outside the Connacht dressing room chanting Bundee Aki’s name. Trade union protests have started and finished in less time than the local kids took to show their appreciation for Connacht’s big name.

A few minutes earlier, Aaron Cruden, his hood pulled up, had exited the playing arena surrounded by Connacht fans. It is that kind of place; nothing flash. Montpellier were a little bit dazed; a lightning try by Cruden after just 69 seconds suggested an enjoyable afternoon in the west of Ireland.

Instead, they were hit by two late tries from Paul Boyle and Tom McCartney shortly before half-time which hinted at a special afternoon. So it went.

The Sportsground went from heavy silence after Cruden’s early score to giddy mischief when Paul Boyle’s 38th minute try set Connacht up for a brilliant five minutes. Connacht had already fluffed a series of terrific scoring opportunities. Now they atoned, with Tom McCartney finishing a try following a lineout maul just before the break. Connacht would not trail again. Yet again, they managed to turn adversity into something positive. But they do need players.

“We brought Pete McCabe in this week,” Friend said.

“We are probably looking at some back three players – of our six, we have four out at the minute. We have Mattie and Niyi pulling out before and then Stephen Fitzgerald and Tiernan O’Halloran not available either. Yeah, we are a bit skinny.”

Robin Copeland got his first start of the season and put in a vintage hour.

“Give a man an opportunity like that and he takes it and you say, right . . .we have to reward that,” stressed Friend.

Caolin Blade broke the second half open with a daring individual try to decorate a brilliant afternoon all over the field. Suddenly, Kieran Marmion’s injury lay-off seemed slightly less of a worry.

“He’s got amazing feet and is a great little leader too. He doesn’t have the captain’s tag to his name but he is an influential leader. Sees the game really well, knows what he wants and demands that. Works really hard himself and there’s a lot to like about him.”

Connacht trusted Conor Fitzgerald, who had been a revelation at outhalf when Jack Carty was on World Cup duty with Ireland, to steer the team through the last 15 minutes of the match. He responded by kicking the penalty that gave Connacht a narrow, famous win. The squad options narrow but Connacht remain expansive in their mindset.