Winger stars in bonus-point win over Terenure; Lansdowne drop to bottom of table 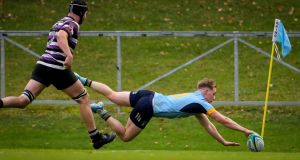 UCD’s Jack Ringrose scores one of his hat-trick of tries in the Energia All-Ireland League Division 1A game against Terenure at the Belfield Bowl. Photograph: Oisín Keniry/Inpho

Jack Ringrose matched his older brother Garry’s hat-trick heroics with Leinster as he helped UCD to an exciting 30-20 bonus-point win over Terenure College at the Belfield Bowl on Saturday.

There was plenty of brotherly love where right winger Ringrose chipped in with a trio of well-taken scores, while the Penny siblings, Alex and Scott, played together in the students’ backrow, and Terenure had Stephen and Mark O’Neill in their backline.

Lansdowne’s poor form continued and they now lie bottom after Young Munster claimed their first victory of the season – a 7-0 success at headquarters inspired by winger Luke Fitzgerald’s 58th-minute try in the corner.

Ulster flyer Robert Baloucoune scored a hat-trick of tries and Aaron Cairns kicked a last-gasp match-winning penalty in Ballynahinch’s epic 35-34 bonus-point triumph at Dublin University. Garryowen made it three league wins in-a-row with a second-half penalty try for a collapsed maul steering them past Clontarf on a 13-10 scoreline.

Meanwhile, unbeaten pair Highfield and Old Wesley are out in front in Division 1B. Tim Ryan’s Cork side received a walkover win – and a full five points – after a mumps outbreak in the Navan squad prevented them from playing.

Captain Steve Crosbie scored a try and kicked three conversions as Old Belvedere won 26-21 against Malone to move back up to third, while St Mary’s College also gained ground thanks to a 16-10 victory over Banbridge which saw winger Hugo Conway run in a terrific 95-metre try.