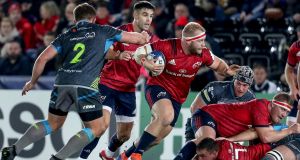 Jeremy Loughman carries for Munster during their win over the Ospreys. Photograph: Dan Sheridan/Inpho

Munster coach Johann van Graan resembled a proud parent in the manner in which he described the rumbustious performance of loosehead prop Jeremy Loughman, a worthy recipient of the man of the match accolade at the Liberty Stadium.

The 24-year-old, who grew up in Athy and is a former member of the Leinster academy, has progressed impressively since taking up a three month, development contract with Munster in December 2017.”He was actually the first guy I signed at Munster,” van Graan admitted. “He came to Munster and fought his way into contention.

“Killer (Dave Kilcoyne) is injured at this stage and Jeremy is performing and improving. It’s great to see guys getting their opportunities and using it. We, as a group say it’s a squad effort from everyone involved, so when you get your chance you’ve got to make a difference. Congrats to Jeremy for getting this opportunity and coming up with a man of the match performance.

While English referee Karl Dickson adopted a laissez-faire approach to the scrums in the first half - both frontrows were prone to rising up and wheeling - he was stricter after the break. Loughman managed that aspect of the game reasonably well all things considered but it was in the loose that excelled both in the quantity of his carrying (11) but more importantly the quality.

He invariably committed multiple defenders to the process of trying to stop him and more often than not he breached the gain line; his frontrow cohorts Niall Scannell and John Ryan also showed up for the grunt work. Only CJ Stander carried the ball more often than Loughman and the latter had the added feather of beating three defenders during his 60-minutes on the pitch.

Loughman was rewarded with Munster’s first try, the byproduct of Andrew Conway’s quick thinking and feet, and a short, sharp softening up process from the pack that allowed the prop to muscle his way over from close range. It gave the visitors a 13-6 interval lead.

Having demonstrated his power he then showcased his skills by throwing a lovely long pass to Conway - returning the favour in some respects - that allowed the wing to gallop 50 metres down the touchline for a try.

In fact it was a good day for Munster looseheads as Loughman’s replacement James Cronin grabbed the all important, bonus-point try, the tail-gunner in a lineout maul, some five minutes into additional time. Given Kilcoyne’s absence Loughman and Cronin have dovetailed well; that will be tested once again next week when the behemoths from Racing 92 rock up to Limerick.

It was a tough evening for Ospreys head coach, the former Northampton Saints, Ulster and Ireland hooker Allen Clarke. Shorn to the bare bones through injury and the enforced rest period for the Welsh internationals post World Cup, the Ospreys are missing two thirds of their first team.

“We know the quality that’s missing and we know where we are as a club. It’s a tough but a tremendous experience for us. I look at Tian Thomas-Wheeler and Kieran Williams; we’d eight debutants in European Cup rugby which is exceptional. I’m not sure many people actually knew that and it’s not something you’d broadcast beforehand against a side like Munster to be honest. They don’t need any encouragement.

“Coming from the system that I’m accustomed to in Ireland, I recognise the huge importance of player welfare and looking after players, particularly in a country that’s got a smaller population than Ireland playing rugby, never mind the overall population. So, yeah, when the draw came out and we were getting Munster at home we’d envisaged having everybody available and I would have fancied us.”

They’ll have two or three players back for next weekend as they travel to London for a clash with the European champions, Saracens: out of the frying pan and into the fire.