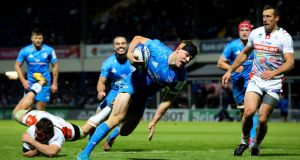 Garry Ringrose completes his hat-trick and scores Leinster’s fifth try of the game in the Champions Cup victory over Benetton Treviso at the RDS. Photograph: Ryan Byrne/Inpho

This can be neatly filed away as the Garry Ringrose game.

An emotive Johnny Sexton is hardly a revelatory sight but Ringrose flinging the ball into the Funderland-end stand was telling. Turns out the leather in question was safely returned by a considerate season ticket holder, and perhaps even gifted to the hat-trick hero thereafter.

This victory hardly signals redemption for returning soldiers from Japan but it does allow them move on with their careers.

That’s presuming anybody cares anymore about what happened over breakfast at the World Cup. This healthy 15,080 crowd – considering the opposition and chilly temperature – were only interested in their Irish players embracing the all-blue shiny strip. Just like Limerick folk last weekend. Same goes for Belfast when Clermont come knocking next Friday.

Don’t mention the war has already become a winter mantra.

The defeated men – refreshed from Dubai sun – certainly want to turn the page. It was obvious from their angry demeanour. Their intent. Their excellence, which was so sorely absent when it mattered the most to them.

Not to worry. Muscle memory of performing on a freezing European afternoon enlivened the collective spirit.

Take the opening exchanges of the second half when Sexton escaped the clutches of four inexcusably weak Benetton tackles before sling-shotting the red-capped Josh van der Flier into the visitors’ 22.

When the Ireland flanker was slowed inches from the try line, Sexton appeared on his shoulder to sprint under the posts, punch the cold sky and roar at his people.

You would never know he had some pent-up frustration to vent.

“I think it is ’cause of you guys giving them so much hassle!” Leinster coach Leo Cullen half joked, half admonished the written media.

A strange stance considering 2019 in general and Ireland’s “failure” – Sexton’s description – happened at the peak moment in so many careers, but Cullen’s primary concern, as ever, is Leinster.

“They are trying to get it off their chest, get back out there and just play, and play well,” he did explain.

“There is a huge amount of frustration when you get knocked out of any tournament. The problem is the World Cup gets such a build-up that – and we have talked about this – there is going to be an anticlimax for guys regardless of how that tournament ends. I think you are going to see it across all the countries.

“They got to get back going now, you can see it in them, that sense that they just want to get out and play well. When things go well it is that sense of ‘yeah, we are doing something positive again, it is not all bad’.

“But definitely we talk about getting back on the horse for the guys. We have so many players who missed out on selection, players who have been away at the World Cup that are key leaders amongst the group, others who have a peripheral role and everyone just wants to get back out and play, and play well,” he repeated while noting: “It was a big frustration watching that game as the players’ timing is a bit off. Hopefully they will be better for this game, with a difficult challenge away to France.”

Lyon next Saturday against the Top 14’s form club will fully test the state of a squad so obviously using home comforts as a means to exorcise the horror of Shizuoka.

And, on this evidence alone, Ireland’s misery can be harnessed into more Leinster trophies. Each and every returning international seemed ravenous to atone for something they can never change.

That’s not the only story coming from the RDS. There is good news – Rónan Kelleher’s seventh try in six matches, some encouraging news – rumours of Devin Toner’s demise have been greatly exaggerated – and some bad news after Caelan Doris’s first European start, framed as base camp en route to Ireland selection, ended after just 15 minutes.

The hip bone of Tongan number eight Nasi Manu inflicted enough damage to skip the head injury assessment and put the 21-year-old directly into the return to play protocols.

Leinster may also have to plan without Joe Tomane for the foreseeable future as the injury-prone Wallaby centre damaged his hamstring in the warm-up. Robbie Henshaw was promoted to the bench as one of Cullen’s reliables, Rory O’Loughlin, started.

But back to The Ringrose Show, he squeezed over for two early tries before completing his hat trick 12 minutes from time to deny a well-coached Benetton any tangible benefits.

“It’s a good day for the Ringroses,” he said in reference to younger brother Jack’s treble earlier in the day helping UCD to All-Ireland League victory over Terenure.

“I think as a player, I probably speak for the whole group, the Irish group anyway, when you finish on a loss [against the All Blacks in Tokyo], you just want to get out and play again really...right a few wrongs.

“Obviously we did that this evening by getting the win but we are under no illusions about what improvements need to made as well.”

And so, Irish rugby returns to its cliché-heavy process-driven conversation about taking each game on its merits. Sounds boring yet it is fair comment as Leinster showed glimpses of the champions they once were and can be again.