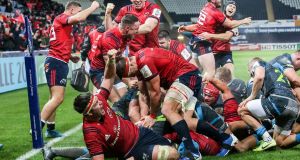 Munster celebrate as replacement prop James Cronin goes over for a try to secure the bonus point against Ospreys at the Liberty Stadium. Photograph: Gary Carr/Inpho

Munster’s bonus point victory on the opening weekend of the Heineken Champions Cup supersedes all other considerations in the short term, even the aesthetics of the performance.

It was fitful at times, starting with a slow burn before crackling into life with a brace of tries in the third quarter but even that paled when compared to the end game.

Johann van Graan’s side retain that sense of theatre reminiscent of their predecessors, the latest act coming in the final play of the game after the clock had turned the colour of their jerseys. Munster fullback Mike Haley fired a penalty to the corner; the upshot following some lovely sleight of hand in changing the fulcrum of the attack was a try for replacement prop James Cronin, his team’s fourth of the night.

It was a merited reward for the visitors’ dominance, albeit that the five-point bonanza looked like remaining tantalising out of reach as the witching hour approached.

“The most pleasing thing about tonight was to see how the players reacted with two minutes to go. They wanted that bonus point and they delivered and that’s all you can ask for as a coach,” said van Graan.

“We as a group were aware there was a lot of noise on the outside of this being a definite five-pointer. Looking at what happened the previous two years with draws away from home in the first round we said, ‘listen, we’ve got to play well, we’re going to come up against a desperate, hungry, motivated opponent and we’ve got to weather that storm’, which I felt we did pretty well.

“It was very satisfying to come away with the win [but there are] a lot of things to improve on. We’ve got such a long way to go but to fight for that last try was very nice.”

Andrew Conway dazzled under the Liberty Stadium lights, by some distance the class act on the pitch in terms of creativity while Rory Scannell gave his team definition in attack by taking responsibility to run at inside shoulders. Collective cohesion will take longer to foster based on the assimilation of returning Ireland squad members although there was evidence of smoothing out some of the kinks as the game progressed.

The Ospreys have endured a rough season to date, one win in six matches in the Pro14, riddled by injury and missing the majority of their marquee players; eight of the 23-man match day squad were playing their first game in Europe. Missing two-thirds of what would approximate to a first-choice team they may have feared the worst and those misgivings materialised, based primarily on a gulf in class.

To their credit they competed ferociously for the most part but they were limited and occasionally careless in possession. Referee Karl Dickson took a benign view on the scrums and the breakdown in the first half but after the interval was a little more rigorous in weeding out and punishing culprits.

Leading 13-6 at the interval, thanks to Loughman’s try and eight points from Bleyendaal’s boot, Munster effectively decided the outcome scoring two quick-fire tries in the 48th and 52nd minutes, the first following a gorgeous lineout move involving the outstanding O’Donnell and then, when play was switched, Keith Earls satisfied the TMO that he kept his feet away from the touchline when sliding over in the corner.

Ospreys brought on four replacements who barely had time to warm their hands before the visitors pounced again. Scott Otten lost the ball in contact and two quick passes later, Conway accelerated down the touchline on a 50m gallop, crossing unopposed. Bleyendaal added a fine conversion and at 25-6 the only question left to be answered was if Munster could secure the four-try bonus point.

They did, at the death through Cronin, in typically Munster fashion; cussed to the end. But underlined on Munster’s to-do list is an improvement in discipline as they conceded a whopping 15 penalties.

Van Graan said: “It’s too much. We’ll look at the individual instances. We pride ourselves in our discipline and it’s got to improve. That being said, to concede that many penalties and still come away with a bonus point is a real positive.”

The Munster coach was cautiously optimistic JJ Hanrahan might be available next week.

“He ran pretty well with the medical team this week. It’s not serious. There’s a good possibility that he could be available [on Saturday]. He stayed behind with our staff at the HPC [High Performance Centre]. Hopefully we will get some good feedback on Monday and should he be available we’ll most likely pick him in the 23.”

Perhaps the final word should go to Munster captain Peter O’Mahony who summed up the merit of the achievement thus: “I said to the lads inside, you can never take for granted getting five points away from home in this competition. It’s a difficult, difficult thing to do.”