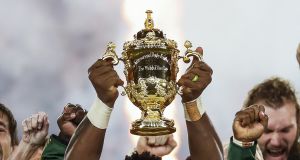 Way, way back in time, circa mid-September 2019, the common perception was that this World Cup would be the most open of the nine to date. Now that it’s finally done and dusted, little about how it all panned out has changed that view much.

The All Blacks were the reigning back-to-back champions and the warm favourites, but were also deemed to be more vulnerable than in 2011 or 2015. That held true and they were hit by the English equivalent of a white bullet train in the semi-finals, pushing the mantle of favourites, uneasily as it transpired, on to Eddie Jones’ team.

Ultimately, the Springboks timed their best performance to perfection, in the final, and were worthy champions. Heretofore, all winners were the product of careful planning and settled managements/teams over a four-year timespan. These Springboks broke the mould.

In ensuring they were the first to arrive and the last to leave, Rassie Erasmus completed the most remarkable transformation of any World Cup winners in just a year and a half and 26 games at the helm.

Captained by Siya Kolisi, and featuring career journeys by the likes of Makazole Mapimpi and Lukhanyo Am that would also have been unthinkable when South Africa rejoined the Test arena in the early 1990s, this was as heart-warming a story at this all-embracing World Cup as was even the case in 1995.

In the process, these Springboks became the first team to lose a match and go on to lift the William Webb Ellis trophy, which perhaps underlines the feeling that this was indeed the most open World Cup yet. Losing that opener against the All Blacks left the Boks with a easier route to the final. By contrast, the All Blacks couldn’t back up their performance against Ireland and then neither could England.

Hence, despite Jones’s snide response that Warren Gatland should enjoy the third-place play-off, the latter’s forecast proved true – sometimes teams do play their final in the semi-finals, a la the All Blacks the 2011 World Cup on home soil. It was undoubtedly true of France in 1987 and 1999, and was almost borne out by the Wallabies in 1991.

Those who ignore the lessons of history are apt to repeat them. Such are the vagaries of knockout rugby that the best teams don’t always win World Cups – witness the All Blacks in 1995, 1999, 2003 and 2007. For some reason, the best team in Europe invariably wins the Heineken Champions Cup. Maybe it’s because the latter is an annual tournament held over the course of a season.

In addition to New Zealand, England and South Africa, others were reckoned to be contenders. Wales could walk away with their heads held high. For the second time under Gatland, they came within a whisker of the final. Japan’s compelling tournament will have spin-offs on rugby in this country forever more.

France had the hard luck story of the knockout stages, if largely self-inflicted, but that quarter-final defeat to Wales might actually serve them better when it comes to hosting the 2023 World Cup. Otherwise, it might have kidded them, and particularly their club owners, that their structures are tailored to their national team. That hasn’t been true in at least a decade.

Last season Guilhem Guirado played 36 matches, and several others were in the mid-30s for games played. If they get their player welfare right, then with Fabien Galthié at the helm and Shaun Edwards possibly set to come aboard, and their conveyor belt of recent Under-20 World Cup winners, they’ll be a serious force on home soil.

The Springboks will, most likely, only become stronger, and a core of this fine English side will be around in four years’ time. They also have a production line of talent, and this team’s growth is the product of improved player welfare (witness six weeks’ holidays as against Ireland’s three). And the All Blacks will hardly go away.

Against that, the Pacific Islands hardly fired a shot, while Australia, Italy, Scotland and Ireland all fell well short.

Everything has to be the best, or the worst, nowadays. The middle ground is shrinking. So it was that World Rugby’s closing self-congratulatory press conference stuck in the craw. True, they had many stats to back up their assertion that this was the best World Cup ever.

Helped, primarily no doubt, by Japan’s performances, the average winning margin between Tier 1 and Tier 2 nations was down to a new low of 30.5. Helped also by the home supporters’ enthusiasm, almost every game was played to full houses, and they also flooded fan zones. In this and many other ways, World Rugby’s decision to bring the tournament to Japan was thoroughly vindicated.

All manner of financial records were also laid out by the governing body and there was the peak audience of 54.8 million which watched the engrossing Japan-Scotland pool finale. What set that game apart was that it came in the wake of Typhoon Hagibis, again demonstrating sport’s powers of healing. For sure, there was some unseemly bickering over the cancellation of three games, but the response of the Canadian players whose match with Namibia was one of those was to shovel mud off the roads.

This is what set the 2019 Rugby World Cup apart. In a country, where politeness, manners, friendliness, cleanliness along with and a vibrant and varied culture and night life, Japan and its people perhaps reminded rugby of some of its supposedly core values. It reminded teams and supporters to treat each other with respect. Teams bowed out, literally, in fitting manner, and all visiting supporters, as well as Japanese ones, responded in kind.

The 2019 World Cup was probably a different experience at home, and the angst and anger over Ireland’s exit was not reflected in the Irish fans. They were disappointed, yes, but like everyone else, they evidently had a blast.

Maybe you had to be here.