Tipping Point: Japan consigned to history as World Cup veterans get back on the horse 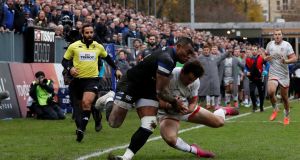 We’ll always have the Heino.

Spending a winter Saturday checking in and out and in again as a Champions Cup schedule ticked by, it felt familiar and warm and us. More our level. It was like getting thrown out of a chi-chi, wallet-rinsing nightclub and ending up having a grand evening back in your local.

If you spent the autumn wondering where Jacob Stockdale had gone, for instance, the last play of the Ulster game in Bath brought it all flooding back.

The match had been won and then it hadn’t. John Cooney had actually kicked the ball into the crowd in triumph up at the Bath 22 after a lineout, presuming they were out the gap. Instead, Bath were awarded a penalty for a crooked throw and went pell-mell the length of the pitch to try and nick the points.

It was scintillating stuff, exactly the kind of thing the competition sustains itself on year after year. Ulster were back-tracking and trying to soak and slow as they went but it looked to be all for nothing. Bath went wide, wide and wider and when Stockdale shot up and only just missed on the killer pass to Zach Mercer, that looked to be that. Will Addison had shot up as well and now Mercer had a two-on-one in 40 metres of space to finish off the game.

It was really only when you saw the replay from behind after the full-time whistle that you realised what Stockdale did to save the day. Seeing that Addison was out of the game, he sprinted back for the corner, directing Louis Ludik to stay and defend the inside as he went. The idea was to make Mercer have to flip the final pass to Semesa Rokoduguni to score in the corner.

When he did, Stockdale dived in at the precise split-second required. That’s no exaggeration. Any earlier, and Mercer would have spotted him arriving and wouldn’t have thrown the pass, either bulling over Ludik himself or taking contact and recycling. Any later, and Rokoduguni was in untouched.

The success of the play relied entirely on him arriving on the scene the second Mercer threw the pass. He grabbed it, got tackled into touch and Ulster were 17-16 winners.

It felt like a long time since anyone punched the air for something Jacob Stockdale did. He didn’t score a try in the World Cup. His four tries for Ireland in 2019 came against Scotland and Italy in the Six Nations and against Wales in a World Cup warm-up game.

This weekend last year he was scoring the try that beat the All Blacks to cap off a year in which he’d set a new record for tries in a Six Nations campaign and been voted player of the tournament. If you wanted a poster boy for the year Irish rugby has had, Stockdale would be whizzing through to the printers as we speak.

Watching him pull off that brief moment of impossibility was a reminder of the ceaseless chug of the sporting train. Playing against Ulster for Bath on Saturday were Sam Underhill and Jonathan Joseph, just about a full seven minutes on from losing a World Cup final with England.

It’s hard to know what’s more ludicrous – that they’re back playing at this level of intensity so quickly or that it passed more or less unremarked upon over the weekend.

But then, that’s sport. You get up and get on. Success is failure filed away, be that in-game or across the span of a season. The ability to perform the mental gymnastics required is a learned skill, as crucial to your progress through a career as perfecting the skip pass off your left hand.

The Olympic trap-shooter Derek Burnett explained one time how he gets over a bad shot. Simply put, he doesn’t. Or, to be more precise, he doesn’t get over it any more than he gets over a good one. After every shot he takes, he wipes his feet on the mat beneath him. Good or bad, the shot is gone, transferred through the soles of his boots and out into the great beyond.

In a way, it’s about murdering your memories. You have to force yourself to go around like an altar boy after mass, snuffing out every candle still lit. You don’t get to linger on either the good days or the bad ones. The quicker you become inured to it all, the better you will do in the long run.

That’s why those of us on the outside of sport so often find ourselves getting far more dewy-eyed about it than those in the arena. We have the luxury of tearing the arse out of the glory days. We have privileged access to the slough of despond after it all goes to pot. We are, at best, third-parties in all of this yet we get to behave as if it happened to us.

Meanwhile, pretty much everyone who didn’t get injured at the World Cup was back to work within a week or 10 days of getting home. The physical ramifications of that are minimal enough – everyone is in the shape of their lives and they have a pre-season to end all pre-seasons done.

But imagine how mentally washed out you’d be if you allowed yourself a moment to dwell on it all? So they don’t. Not if they can help it.

In a way, that was the stand-out aspect of the Champions Cup weekend. Right across the competition, there was rugby played as if there had been no rugby played for months.

On a purely selfish Irish level, the tries scored by Keith Earls and Andrew Conway, Stockdale’s saving tackle, Garry Ringrose’s hat-trick – these were glimpses of ability and presence that would have seemed far-fetched a little over a month ago.

Though we goggle at the skills sportspeople put on show week after week, the hidden talent for moving on unburdened by it all is every bit as impressive.