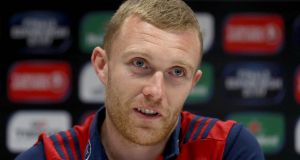 Ronan O’Gara, the late Anthony Foley, Donnacha Ryan and Simon Zebo are the ties that link two clubs who share a close affinity in recent times, forged not only in the tragic circumstances of Foley’s untimely passing but also in the cross-pollination of people.

It’s a narrative that inserted a human dynamic into a sporting chronicle. The tournament fixture schedule has thrown them together four times in the last two seasons, with Munster winning on three occasions, but in the current campaign, each side won their home match.

It is possible to delve into the statistical flotsam and jetsam and pull out numbers that substantiate either side of a debate about the outcome of the third tie. Munster have lost their last five semi-finals in Europe, eight of 12 in total, many of them in France, but 18 years ago at this very stadium in Bordeaux produced one of the all-time great performances to beat Toulouse 31-25, a breathless afternoon in brilliant sunshine.

No one understands the fundamentals of European competition better than Munster, this their 13th semi-final, three more than any other club. Several of their number will drawn down on that direct experience, but so can a large tranche of the Racing side as they beat the Leicester Tigers 19-16 at the penultimate stage of the tournament two years ago before losing a final to Saracens.

Are past achievements an augury for what will unfold at the Stade Chaban-Delmas on Sunday afternoon? Maybe, but it is arguably more relevant to address current form.

Munster should have derived some benefit from a two-match tour to South Africa, not just in terms of confidence, momentum and camaraderie, but in being given a fortnight to specifically prep for this match. There were lessons to be absorbed too. Munster could have been further behind at half-time in both the Southern Kings and Cheetahs match, and are unlikely to escape a slow start in Bordeaux against a team infinitely better than the two they faced.

What was impressive was Munster’s ability to recalibrate their patterns sufficiently to discover a winning formula; against the Kings it was a wide, expansive, free-running approach, while excellent discipline and an ability to squeeze the Cheetahs into transgressions won the second game.

Keith Earls’s remarkable rehabilitation from injury forced Johann van Graan to make a selection decision in the back three, and while Zebo is unfortunate to miss out, Alex Wootton and Andrew Conway are in form and healthy. The midfield partnership of Sam Arnold and Rory Scannell has passed every exam with flying colours.

For Ian Keatley and the peerless Conor Murray to exert control, the forwards will have to do the heavy lifting, and it promises to be a long, physically gruelling afternoon at every collision-point, setpiece, breakdown, maul and the tackle environment. Ryan’s presence in the Racing pack may provide a little insight into the opposition as individuals rather than lineout calls.

Plenty of teams have tried to shut down Peter O’Mahony as a primary source without success, but what Ryan will have impressed upon his colleagues is the folly of throwing their ball in the Munster’s captain’s vicinity.

A key for Munster will be to maintain a high tempo. Racing are fond of rugby’s equivalent of the quickstep; slow, slow, quick, quick, slow. They play in bursts and that is reflected in scoring. The Irish province needs to ensure that there is no respite from a relentless pace, wearing down the opposition through the carrying of the pack, especially CJ Stander, Niall Scannell, Dave Kilcoyne and releasing Jack O’Donoghue into the channels where his athleticism can have maximum impact.

For Munster it is also about having the confidence to go wide, get the ball into the hands of the back three, and to vary the chosen pod of carriers so as to keep the Racing defence guessing. It’s about controlling the ball, the tempo and the territory.

Racing possess some outstanding individuals. As a finisher Teddy Thomas is a nonpareil in European rugby this season; there isn’t a better athlete in the tournament than Fijian Leone Nakarwara, whose offloading ability is outrageous. Ryan is a key member of the team, while the backrow of Wenceslas Lauret, Bernard Le Roux and Yannick Nyanga is very effective on both sides of the ball.

Scrumhalf Maxime Machenaud provides intelligent direction and is an accomplished place-kicker. Fijian Virimi Vakatawa is a wing by inclination, playing in the centre. Dan Carter’s cameo off the bench in the semi-final against Clermont Auvergne won the match. The timing of his arrival on the pitch on Sunday will be instructive.

The red flag issues for Munster are a slow start, indiscipline and becoming involved in a collision-fest. Racing are favourites but Munster’s Lazarus-like ability in recent months, that knack of finding a way to win, is incalculable, especially in a tight game. They may need to roll back the stone one more time.