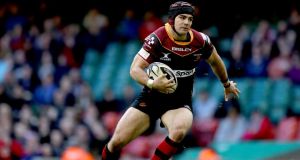 Newport Gwent Dragons’ Adam Hughes has been forced to retire due to a brain injury. Photograph: James Crombie/Inpho

Dragons centre Adam Hughes has announced his retirement from professional rugby with immediate effect due to a brain injury.

The 28-year-old Newport-born academy product, who made 119 appearances for the region since his debut in 2010, scoring 22 tries and 124 points, has not featured since facing Ulster in the Guinness PRO14 in September.

“Following a precautionary scan at the Queen Elizabeth Hospital in Birmingham, the neurologist said that playing rugby wasn’t an option due to two major trauma scars that I had sustained on my brain, so the decision was made there and then for me,” Hughes said in a statement on the Dragons’ website.

“Playing for the Dragons has given me some unbelievable moments, and I will never forget running onto the pitch for my first appearance at home against Cardiff Blues in front of a packed Rodney Parade, and almost scoring in the corner with my first touch.”

Dragons head coach Bernard Jackman added: “I would like to take this opportunity to thank Adam for the huge contribution he has made to the Dragons.

“He was a versatile player that had brilliant pace and evasion. We wish him well in his next career.”