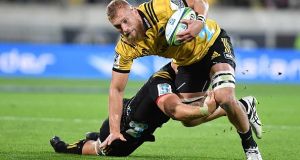 Brad Shields in action for the Hurricanes against the Chiefs last month. Photograph: Mark Tantrum/Getty Images

Brad Shields has made an official request to be released by New Zealand Rugby for England’s tour of South Africa in an attempt to smooth a path towards making his debut for Eddie Jones’s side in June.

The NZR chief executive, Steve Tew, confirmed that Shields had made the request and that the union is considering its response. England believe they are entitled to pick the player regardless, in accordance with World Rugby regulations, but should the NZR accept his plea it would avoid a drawn-out dispute.

As revealed by the Guardian this week, Jones has permission to pick the New Zealand-born Hurricanes flanker – who qualifies through his parents – despite the English RFU’s policy of not picking players based outside England. If Shields, who is joining Wasps next season, does go to South Africa he would return to the Hurricanes and play up to six Super Rugby matches before arriving at the Premiership high-flyers.

Tew initially threatened to block any attempt from England to select him, insisting Shields has a clause in his contract which means he can only play for New Zealand teams. England meanwhile, believe World Rugby’s regulation nine – which governs player release – means the flanker is available to them.

Tew reiterated his view that World Rugby regulations do not apply but, in what appears to be a softening of his stance, told the NZ Herald: “He’s contracted to New Zealand until the end of Super Rugby and so the World Rugby regulations don’t apply per se because he’s committed himself to New Zealand, but he is a long-standing and loyal servant of the game and has put a request in.

“There’s no point in not acknowledging that Brad has been a very, very good servant of the game for a long period of time. If he had been picked for the All Blacks we wouldn’t be having this conversation but he hasn’t made that cut and is now taking a different direction. We’re not going to muck around. There’s no point in taking weeks when he and England need a decision faster than that.”

World Rugby is yet to comment since Tew’s initial threat to block any approach for Shields but when asked last week if the Hurricanes would be obliged to release him if England wanted to select him in June, the governing body told the Guardian that was “absolutely the case.”