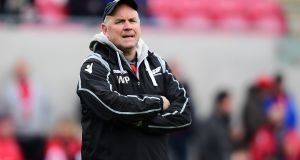 Wayne Pivac has no doubt that the Scarlets will require a complete performance in their quest for a first European Champions Cup final appearance.

Pivac’s team tackle tournament favourites Leinster at the Aviva Stadium on Saturday after ending an 11-year wait to be European semi-finalists.

No Welsh team has been crowned European champions — Cardiff were inaugural finalists 22 years ago — and the Scarlets face a side unbeaten in this season’s competition following home and away victories over Exeter, Montpellier and Glasgow, plus a quarter-final success against Saracens.

“To be unbeaten in the competition, and to do that home and away against the quality of their pool, shows the strength of their squad,” Scarlets head coach Pivac said.

“It is just going to be one of those games where, from the first whistle to the last, we’ve got to be at our best. Our discipline has got to be right up there.

“We know they are the favourites going in, and rightly so because of their form in the competition. You also go through their squad and most people would have them down as favourites.

“We are going to have to be sharp in our attack and make sure when those opportunities present themselves we are ready to capitalise. We have to take the points when they are on offer.

“For us, it is a semi-final, it is an opportunity. It is 80 minutes away from creating history, being in our first (European) final. That is the way we are approaching it.”

Halfpenny, who kicked 19 points in a quarter-final victory over La Rochelle, will wear the number 14 shirt, while Rhys Patchell moves from outhalf to fullback and Dan Jones moves into the team as Gareth Davies’ halfback partner.

Leinster, meanwhile, are boosted by the return from injury of Ireland international centre Robbie Henshaw, who partners Garry Ringrose in midfield, with outhalf Johnny Sexton captaining the team.

Henshaw has been sidelined since suffering a shoulder injury during this season’s Six Nations Championship.

Munster tackle Racing 92 in Sunday’s semi-final at Stade Chaban-Delmas in Bordeaux, with the Irish side welcoming back fit-again wing Keith Earls, Alex Wootton featuring on the other wing and Andrew Conway named at fullback.

“They’ve got big players, incredible individuals with hundreds of internationals caps between them,” Conway told the Irish province’s website.

“There are guys who know how to win knockout games of rugby in both teams, and we know Racing quite well from the last few years.

“They will be looking at opportunities that they feel they can take against us, and vice versa.”

Cardiff Blues, European Challenge Cup winners eight years ago, will return to the final if they beat Arms Park visitors Pau on Saturday.

The Blues emerged from a tough qualifying group that also featured Toulouse, Lyon and Sale Sharks, while they beat Pau home and away in last season’s pool phase.

But the French club won all six of their group fixtures this term, collecting 29 points from a possible 30, and they arrive in Wales with key performers like Conrad Smith, Frank Halai and Steffon Armitage among their starting personnel.